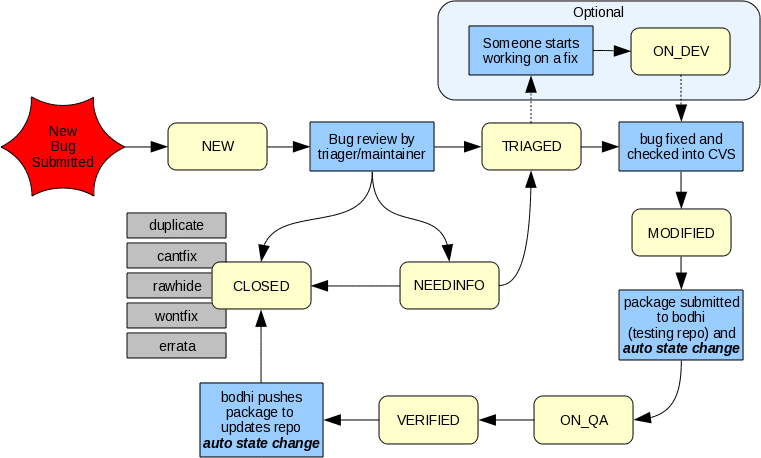 This bug state flow came as a result of the bug triage relaunch that started in January 2008. This work flow was approved at the meeting on January 24, 2008 . As a work flow these are not hard and fast rules to impose on people. Instead it is intended to bring more uniformity and predictability to the life of a bug. If you have a good reason to break them, feel free. This is the process the triage team will follow.

This document applies only to 'conventional' bugs - i.e., it does not apply to special cases that happen to use the Bugzilla system, like package review requests.

Updated 17 March 2009 to reflect changes to the NEEDINFO representation.

The needinfo flag is added by bug triagers or maintainers when adequate information is missing to move the bug towards resolution. If adequate information is provided, the triager will clear the flag, and set the bug to NEW with the Triaged keyword. If not, needinfo bugs are eligible for closure (changed to CLOSED INSUFFICIENT_DATA) by the triage team after all of the following have been met:

A stock message will be used by all triagers for bugs meeting the closure criteria. Stock bug triaging messages are found at BugZappers/StockBugzillaResponses.

Because needinfo is a flag and not an exclusive state, these bugs can also simultaneously be marked as NEW, ASSIGNED, etc, where appropriate.

The Triaged keyword is added once the triage team believes that this is a complete actionable bug. It contains:

The reporter has also included one or more of the following (as applicable):

Fedora 12 and previous releases, this status was used to indicate that a bug had been triaged (as is now indicated by the Triaged keyword).

This optional state is used to show that someone is working on fixing this bug. This is especially useful if there exists a team of maintainers for a package.

When a maintainer has a fix for a bug checked into CVS the bug should be placed in the MODIFIED state. This is an indication that the fix is checked into CVS and has potentially been submitted to be built in a new package. Adding a link to package in koji is very helpful for adventuresome testers and the original bug reporter to verify the fix.

The use of MODIFIED for Rawhide bugs, or non-critical-path Branched bugs outside of freeze times, is optional; a maintainer may choose to use it to ask the reporters to test the fixed package to make sure the fix works before closing the bug, but can also go direct to CLOSED RAWHIDE (or CLOSED ERRATA for Branched bugs) on committing a fix, or change a MODIFIED bug to CLOSED if no reporter appears willing or able to confirm the fix.

A bug automatically transitions to this state when an updated package is submitted to bodhi for a particular bug and the package is in the testing repo. This tells the bug reporter that a fix for the bug is available and that they should test the package. After testing the package the bug tester or original reporter should put feedback in bodhi and add a comment to the Bugzilla.

The VERIFIED state indicates that a bug has a confirmed fix available in an updated package. A fix is considered confirmed due to user's comments in Bodhi or Bugzilla, or it may be confirmed by bug reporters, testers or triagers through first-hand tests. The release of Fedora must match for both the bug report and the updated package. User intervention, such as workarounds or manually-applied patches, do not meet the requirements for this state, as they are not contained in a package.

VERIFIED is the final state that is manually set before the bug is automatically closed by Bodhi.

The DEFERRED resolution is not intended for use by Fedora (it is used in the RHEL process).

For Rawhide, maintainers can choose to move to CLOSED RAWHIDE as soon as they commit a fix to CVS, if outside a freeze period; the MODIFIED process is optional.

If so designated by the maintainer, Bodhi can automatically close a bug when the package moves from the updates-testing repo to the updates repo.

The FAILS_QA and RELEASE_PENDING bug states are not used by Fedora (they are used in the RHEL process).

The priority field may be used, at their choice, by maintainers to keep track of the order in which they wish to address bugs in their package(s). This may be done with relation to the severity setting, or by any other method the maintainer chooses, at the maintainer's sole discretion. It may also be entirely ignored, if the maintainer in question does not wish to use it. No-one other than the maintainer or team responsible for a particular bug should change this setting at any point.

Reporters have no access to set the severity or priority fields. This is by design. The priority field exists solely for the convenience of the development team, and it is usually the case that only triagers and maintainers have a sufficient overview of all issues correctly to determine the severity of any particular bug.

The values for the severity field should be assigned with reference to the following guidance:

The urgent setting should not usually be used for hardware-specific bugs: a bug which causes the entire distribution to be affected but is restricted to a single specific type of hardware should usually be set to high. For instance, if a bug prevents X.org working correctly on a single particular graphics chipset, the high severity, not urgent, should be used.

For most packages, most issues are likely to be of medium severity. These are not hard and fast rules, and triagers (and maintainers) should use their best judgement in setting the severity field appropriately. There are obvious cases which require the exercise of judgement - for instance, a bug which affects more than just the program in which it occurs, but less than the 'whole system'.