Difference between revisions of "Category:Copr" 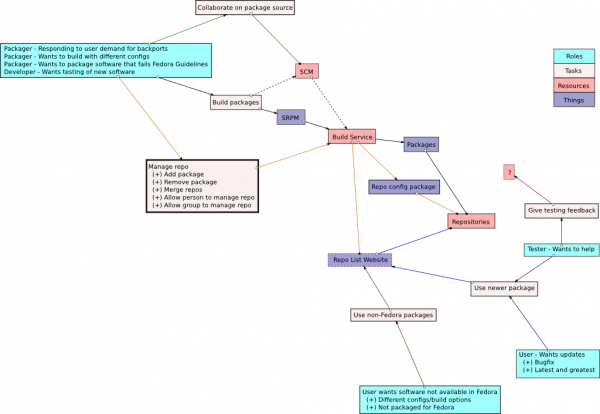 Copr (Cool Other Package Repo) is a Fedora project to help make building and managing third party package repositories easy. The instance to be installed within Fedora Infrastructure provides Fedora maintainers with the ability to create repos of packages to build against and share with others.

Scripts to start on

kde-redhat is a large external repo, asked rdieter how he manages it so far.

All I'm doing really is building stuff, either in koji or my own mock instance. Grabbing those rpms, signing them, stuffing it into repos. Whatever kopers end up being, can't be much worse than what I'm doing now. honestly.

A Fedora maintainer would be alloted up to 1GiB of storage for package repos. Packages can be built for any arch Fedora builds for (but doesn't have to be all of them). Copr would have repoview content for easy browsing and subscribing to changes. Copr's could be increased by request.

We'd like to enable people to make development like spins of Fedora that include content from Coprs. Since all content in Coprs has to adhere to Fedora's guidelines it should be safe (?What do we mean by safe and what guidelines make it so? TK). We just need terms in the trademark that allow for this kind of spin creation and sharing so that these people don't have to spend time re-branding and can focus more on development.

A few new tools might be needed for dealing with Coprs.

A script would be needed to initiate a Copr build. This will submit the build to the Copr buildsystem.

Tool to add package to a copr

The build system needs to be able to add the package to the copr on the shared filesystem and create new repodata for it. We want to be able to remove older versions of packages. But we also want to have former packages so that people can downgrade around problems if they have to.

This tool could also be used to add already built packages to an existing koper without having to go through a koji build (?Do we want this? TK).

Here are some thoughts for future enhancements once we prove that we can walk. Some of these may go into the first version since we have to write a new buildsystem to deal with this.

This category has the following 3 subcategories, out of 3 total.

The following 4 pages are in this category, out of 4 total.