Fedora currently ships a Docker base image, but Docker supports a layering concept. There are some applications like Cockpit which we would like to ship as layered applications.

This change will deploy the build service to support building and delivering a set of layered Docker images, and will enable Fedora contributors to create and maintain Dockerfiles from which those images will be generated.

This change opens up an new type of official binary artifact produced by Fedora. Currently, we produce two main types of artifacts: RPMs, and images. The RPMs are created in Koji from specfiles in dist-git. The images come in different formats, but have in common creation in Koji from kickstart files — this includes the official Fedora Docker Base Image. This change introduces a new type of image, a Docker Layered Image, which is created from a Dockerfile and builds on top of that base image.

The system has five major parts:

For more information, see this presentation for the high level overview of the whole system. 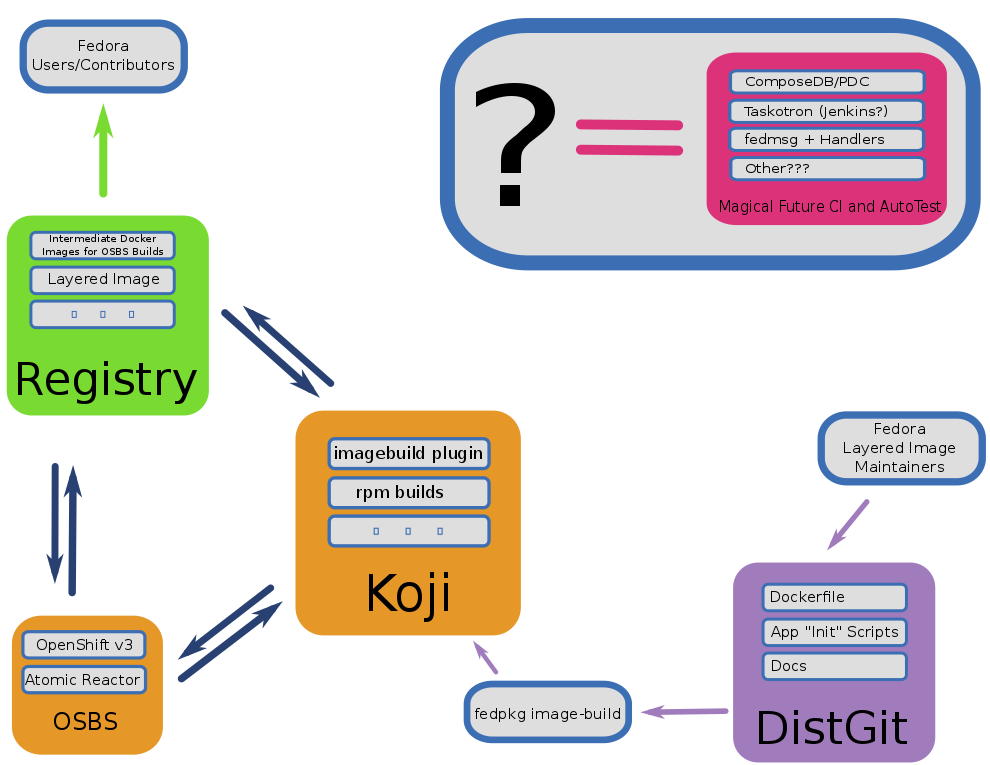 What is the benefit to the platform?

Docker is a very popular way to deliver container images. This will help deliver Fedora-based containers inside the Docker ecosystem, and other applications that are part of the Fedora package collection as containers.

Fedora Server is planning to deliver Server Roles as containers; this will facilitate that. And vital parts of Fedora Atomic are now designed to be delivered in containers, but we currently have no mechanism to do that within Fedora itself.

By having our own build system that ties into a Fedora specific docker registry will lend itself to allowing for CI workflows around containerized application stacks as well as easier automated testing.

Proposal owners shall have to

See Layered Docker Image Build Service RACI Matrix for an individual breakdown of tasks and responsibilities. This also includes a basic, task-level accounting of status, which we will keep updated.

Out of Scope (Intended for Future Changes)

There are plans right now to have ComposeDB(PDC) store information about build artifacts, integration with that system is something we will need in order to enable others in this list. ReleaseEngineering/ComposeDB

Ultimately we would like for every build of a docker layered image to trigger a test in Taskotron via fedmsg.

In the future, images could be integrated into Bodhi, just like RPMs.

It would also be nice to have a pkgdb interface, but that shouldn't be a blocker.

Since the world of containers is changing rapidly, it is possible that the system might need to be upgraded in future to latest stable version.

Ideally, we have a Fedora registry. If so, then adding it and doing:

Before we have a registry, images can be tested by downloading the images, using docker import, and docker run.

From a container packager point of view, the overall experience should be very similar to that of an RPM packager. Instead of a spec file, a Dockerfile will be created, but then that will be built using fedpkg through koji. This maintains both a comfortable workflow that will be easy for contributors to adapt to, and the release engineering benefits of koji.

Alternately, users can pull from the upstream project's Docker Hub as we will also be pushing images there.

The new system will need maintenance and administration. For example, the new dist-git repositories will need to be managed.

NOTE: The osbs client tooling has been packaged and is in Fedora, OpenShift is not and will potentially require a bundled library exception pending the decision on golang package guidelines and bundled libraries.

People continue to upload to the Docker Hub in an ad-hoc fashion with no integration with Fedora.

Implementation documention, user documentation, and infrastructure documentation will be developed as part of the project but does not yet exist.