Due to a bug in the image checking library, the media check function of the Fedora 15 Beta installer will always fail on 32-bit images, even if the medium is in fact correct. The 64-bit images are unaffected. To work around this issue, simply do not use the media check function of the installer; you can verify the integrity of the image outside of the installer. 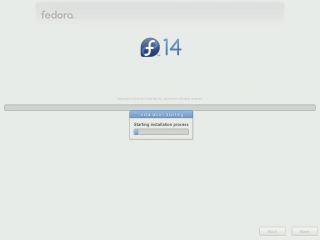 The GNOME 3 NetworkManager configuration interface in Fedora 15 Beta (the applet by the user menu, and the control center Network entry) contain a bug which causes them to hang if you try to configure a hidden wireless network by typing in its SSID. To work around this bug, you can run the standalone configuration tool nm-connection-editor, either by running it from a console, from the alt-f2 dialog, or by finding it in the Overview (it has the name Network Connections). This tool is able to configure hidden networks correctly. This tool is a useful fallback for any situation where the GNOME 3 configuration interface is problematic or incomplete.

This issue was fixed in the updated control-center-3.0.0.1-3.fc15 package. To solve the issue, update your Fedora 15 Beta installation as usual. You should no longer encounter this issue after updating to that version or later of

plymouth package, users may be unable to login to their system when using a serial console to login. Affected users can work around the problem by adding the boot option plymouth.debug. An updated plymouth-0.8.4-0.20110304.1.fc15 package is available that resolves the reported issue. To apply the update, enable the Fedora 15-Alpha package repository during installation, or apply the update manually after installation using the command su -c 'yum update plymouth'