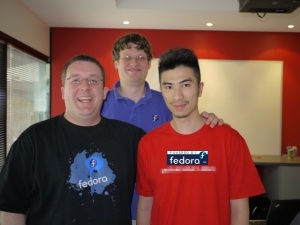 My name Microcai, I born in China and live in China. I am about to leave The University of Zhejiang Sci-Tech. I started programming long before I can have a computer. In the dark days of my life, I write programs on paper, and execute it in my minde. My first computer was a Lenove PC with 15" LCD and 256M RAM @2005. In 2008, I god a new computer, I DIY[1] it myself. It as an AMD based computer with GForce 7300LE GPU, and 17" wide screen LCD. This computer stay with me untill now, with some update.

I installed Fedora 8 [2] in early 2008 when I DIYed my 2nd computer. Fedora remained for my major Desktop OS, until late 2009, I switched to Gentoo for better understanding & control of the Linux OS. After one year of exploring in Linux world , I begin to join Fedora community in 2009. After I switched to Gentoo, I still contribute to Fedora when ever possible.

I joined Chinese (Simplified) in Fedora Localization since 2009. I have translated some documents. But soon after I got familiar with Linux, I started programming and stopped translating documents. I write the ibus-handwrite for those who don't know how to input via keyborad but draw it by mouse. I write an cjytty patch, so the VT console can display localized character.

Here are my personal Fedora goals in 2011. Daily tasks of my various Fedora roles are not included for readability:

I will collaborate in..