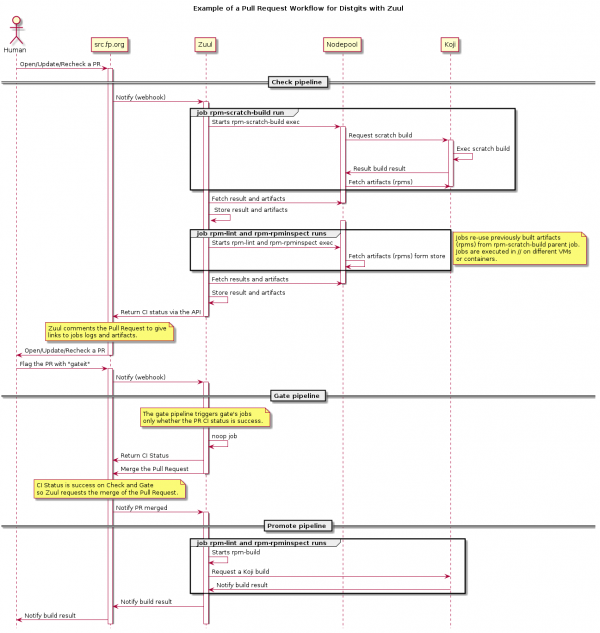 How to attach automatically several repositories with Zuul

I would suggest to start with few packages first.

For more packages this need to be automated. We don't have yet the tooling to onboard projects automatically but at a first glance, the Pagure API provides endpoints to update project ACLs and options so it should be possible to update automatically project settings. However for the PR approval part it seems the endpoint to manage allowed PR metadata tags is missing.

The rest is simply YAML files to edit and two PRs to open. This can be done automatically as well.

Why does zuul need to be an admin on the repository ?

That's a good question. Ideally the commit access would have only be needed (Zuul is also a gating system, it merges the code) but dealing with the events and API brings some difficulties at authentication level. Here is the explanation. Zuul needs to receive Pull Request and Git repo events but also it needs to be able to act on the PR via the API. To receive events Zuul relies on the Pagure Web Hook feature, Zuul serves an HTTP endpoint that Pagure uses to send payloads in case of events. Payloads need to be authenticated, to do so Zuul needs to know the Web Hook token configured in Pagure in the repository settings. To use the API Zuul needs the repository API key. Both the Web Hook Token and the API Key are unique per repository on Pagure. For each configured Pagure repository, Zuul will discover the Web Hook Token and create/reuse an API key via the Pagure API (connector endpoint) and this requires admin right on the related repository.

I'm not aware of other ready to use solutions for that use case. For instance, to mitigate this, in the future Pagure could provide another user role level with commit access + access to the connector endpoint. In fact having this would ease third party application integration with Pagure. For instance on Github, there is that concept of application and Zuul relies on it to integrate easily with Github repositories.