Bringing the Cloud to the Fedora Desktop

Fedora 11 was the first linux distro I ever used and even though since then I've used many other distros, I always find myself coming back to Fedora again and again.
I'm using Fedora 15 currently (for me, the GNOME 3 desktop was a big attraction), but that's the part that I want to change. I've always been a user but never a contributor. It's time that I gave back to the FOSS community after so many years of taking from it.
Moreover, the Fedora project is very large and diverse. The experience that I will gain from contributing to Fedora is not something every organization can provide. I definitely have the interest and curiosity to become a part of the Fedora project.

I have not had any experience contributing to the Fedora project or in fact, any other open source project in the past. But it's never too late to start is it? :)
As I mentioned above, this time around I want to contribute to the Fedora project, and what better way for a college student to start than through GSoC.

I have not participated in past GSoC programs.

I would definitely be willing to continue contributing to the Fedora project on a more permanent basis in the future. I am graduating from college June of 2012 and will be more than excited to invest more time to support some part of a project as large as Fedora.
I have not really explored all the teams that come under Fedora, but I would like to contribute to the Aeolus-project and the Ruby SIG. The former because the cloud is something that's always caught my attention and OS virtualization is something I would want to contribute to. I chose the Ruby SIG because I learnt Ruby recently and I love what it's capable off. In fact I have already subscribed to the rubySIG mailing list and added myself to the list of people interested in it, if that's any measure of my interest in the area :).
Also, I'm definitely open to being assigned to a particular project depending on the match between the need and my skills.

In my opinion, the Fedora project should choose me for the following reasons:

If given a chance to work with the Fedora project, I would definitely ensure that I give enough time to the project and see it through to successful completion. I would be available the whole of the summer to work on the project.

The Aeolus-project is an umbrella project that provides the complete functionality required by a user to run and manage virtual machines on various cloud service providers such as Amazon EC2, Rackspace, Red Hat RHEV etc.
Aeolus exposes an open source API that allows us to write tooling to deploy, monitor and manage a number of instances on various cloud providers. Currently, the Conductor web UI and some limited command line tools (Aeolus-Cli) are the only way to achieve this functionality.
We require more tooling (GTK based GUI/command-line/additions to the web UI) that can help the user interface with the various Aeolus components in more novel ways and perform tasks that are currently not in the scope of Aeolus-Conductor or Aeolus-Cli. These tools would make intelligent decisions about which cloud provider to deploy an instance to based on various constraints such as the cheapest cloud provider or the one with the fastest response time and so on. We also want to be able monitor running instances through various visualizations such pie-charts, bar-graphs, etc. These will help the user manage and control cloud usage better.

As of now, the Conductor web UI, although quite sophisticated, provides two basic options of Monitor and Administer. The former option allows the user to keep tabs on various instance pools, individual instances and deployments and lets the user monitor usage statistics and any alerts or warnings raised by the cloud provider. The latter option lets the user manage various aspects of the deployments and cloud-providers such as users and user groups, environment settings, content catalogs, setting up new providers and other general settings.
Coming to the command line interface(Aeolus-Cli), it's functionality is limited to a subset of tasks that can be achieved through the Conductor web UI. It can perform the basic functionality of building an image using a template file, pushing an image onto a cloud provider, and cleaning up once the instance is no longer needed.
As is evident, the web UI and the command line utility are quite limited in scope and there is so much more that can be done. The following needs will be fulfilled once the proposed project is complete:

This project would require knowledge of Ruby -- for programming the command line utility and adding other services, Rails -- the Conductor is a Rails app, so Rails knowledge would be needed to augment additional functionality to it, Python -- the desktop UI tool will be implemented using PyGTK, and general knowledge about the Aeolus-project and how it is structured.
The relevant experience I have is as follows:

A note on the architecture of Aeolus: 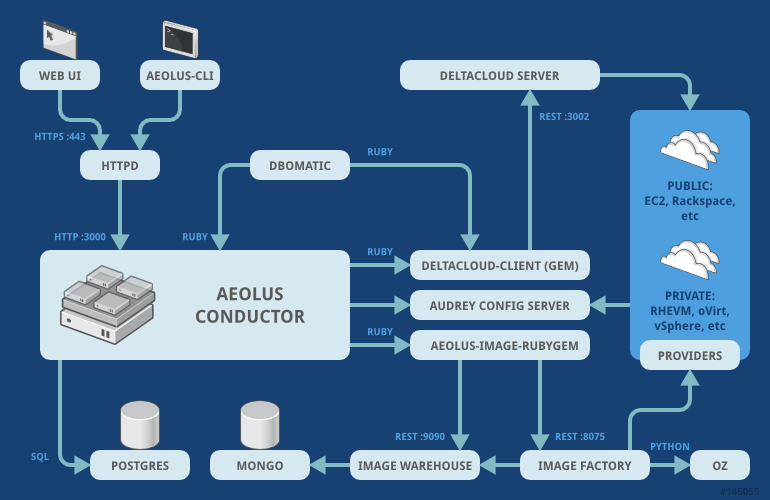 Figure depicting the architecture of Aeolus

The final deliverables of the proposed project are :

These additions to the Aeolus-project would definitely benefit the user and would allow them to exploit OS virtualization to its true potential.

My plan is to continue contributing to the project post GSoC.

I contacted the mentor ( Mo Morsi) about a week before the Fedora project was even confirmed as a participating organization. I have constantly been in touch with him ever since. Whenever he has mentioned a technology or language that may be required for this project (for eg., Ruby, Familiarity with the Aeolus codebase), I have made the effort to immediately act upon it and have spent the past couple of weeks familiarizing myself with everything I may need to implement this project successfully.

I have been in touch with Mo Morsi for some time now. He is the mentor for this project and it has been proposed by him.