This project aims to create a .NET core wrapper library for systemd, a service manager and process hypervisor in modern Linux systems. Using this library, actions such as monitoring and controlling the state of services, controlling power, devices and other system aspects of the underlying system can be performed from a language running on .NET, such as C#.

systemd is a suite of basic building blocks for a Linux system. It provides a system and service manager and starts the rest of the system. It also includes a logging system, utilities to control basic system configuration like the hostname, date, locale etc. systemd provides a way for programmatic access to systemd actions through the DBus API. This library would use DBus to interact with systemd daemon and offer monitoring and control over services running on the system.

systemd is broken down into various services which are started by systemd itself. These services along with systemd, provide the basic services required by Linux system.

Create a .NET wrapper for systemd, that will be able to:

A systemd wrapper library, published as a nuget package.

We will be implementing the interface to systemd service manager and the systemd-logind manager. We are going to use the DBus API of systemd to make inter-process calls to systemd daemon. For DBus in C#, We will be using Tom Deseyn’s Tmds.DBus library.

Advantages of Tmds.DBus over other libraries

This is another library that enables to make us DBus calls from .NET and Mono.

All interfaces will contain both, the synchronous and asynchronous versions of all the supported systemd operations. As per the .NET conventions, all the async counterparts will be suffixed with Async. 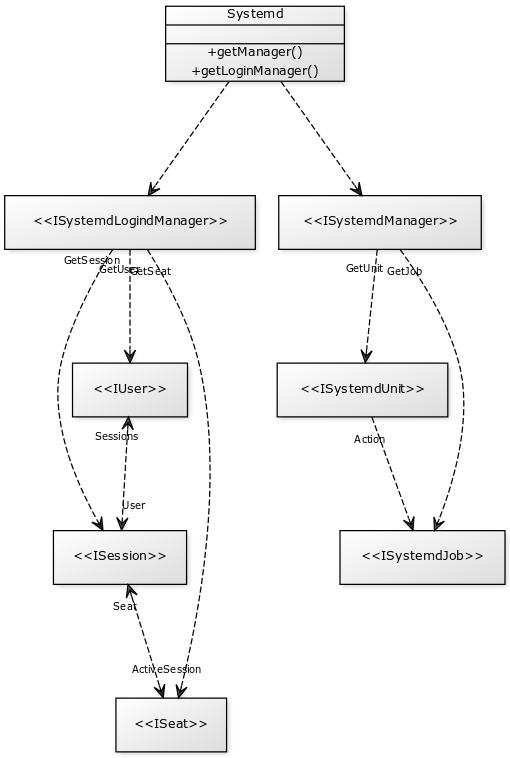 This class will serve as the main entrypoint to the library. It will return implementations of ISystemdManager and ISystemdLogind manager.

These methods, when invoked with appropriate parameters, will return a object of a class which implements ISystemdUnit interface.

Every method will return an instance of an implementation of ISystemdJob. It represents a systemd job with the job queue, which can be used later to check the status or cancel the job.

The ISystemdJob represents a systemd job in the job queue. It will have the following methods and properties:

This pattern will leave the scope for extending or replacing the default implementation of the ISystemdManager, such as connecting to a remote host using SSH and proxying calls between the local and remote systems.

The IUser interface represents a User on the host.

The ISession interface represents a shell session started by a user.

The ISeat interface represents a physical seat on a multi-seat capable system.

systemd signals provide an way to notify listeners about various system events. Signals will be implemented as standard .NET events on ISystemdManager and ISystemdLogindManager.

The default implementation included with this library will be an implementation of ISystemdManager which will use DBus as its medium to connect to the local host’s DBus running on the system bus and the session bus.

The systemd-logind is available at org.freedesktop.login1.Manager DBus interface in the system bus.

The default implementation will be set of classes under the implementation namespace. The classes will proxy all method calls to a DBus interfaces using Tmds.DBus.

The general pattern for all classes in the implementation will be: Constructor that accepts the underlying DBus interface for the class. Methods that when invoked will call methods on the DBus interface.

Shutdown and restart will stop a system and start it again. Tests cannot be made in virtual machine based CI systems.

A docker container can contain logind tests for reboot, and shutdown, which will be started on receiving a signal from the test runner host. The host will then check for desired outcome of the test by using the API of docker daemon.

Multi-seat and session locking is only relevant when the system has at least 2 display units, CI environments and docker containers are headless.

I will be testing the code on my desktop, connected to two monitors, two keyboards and two mice, to make a multi-seat system.

Here are some alternatives to consider in the long run:

We can setup QEMU-KVM virtual machines, inside the CI environment, with two display units and test within it. However, this will be inconvenient as it requires moving huge files (8-9 GB) around (as CI services do not cache files), and due to memory constraints inside a CI environment.

Phase I - Learning, ideation and preparation

Phase 2 - Coding for the systemd manager:

Why did I choose Fedora ?

My first exposure to Linux world was thorough Fedora. It was back in my 9th grade when I first installed Fedora 16 (Verne). So I was always interested to contribute back to the project if I got any chance. Fedora project is also a very good project with a large user base, so any effort in contributing the project will help a large community.

Besides, the project idea of building a .NET core wrapper to systemd was appealing as I’m familiar with systemd and its working, as well as I have good coding experience in .NET in general.

Why did I choose this project ?

.NET core is a budding open source platform, based on the foundation of the well tested .NET framework. It is cross-platform and has the potential to become a great server side framework, in near future.

However, one of the of hurdles for developing solutions in .NET in Linux has been the lack of decent libraries for system integration. This project is a step towards bridging those gaps and bringing a deeper system integration to .NET core applications. Experience I have been writing code in .NET over last four years. I am confident enough about my language skills. I have completed a number of freelance projects using .NET. I also have a good experience in object oriented programming concepts and software testing.

Being a long time Fedora user and a programmer with curiosity, I am familiar with the internal workings of a Linux system and system APIs. I have worked with DBus (though mostly in Python and Go) as part of two hobby projects.

Last summer, I had interned at an educational startup (and subsequently worked part time of 8 months) where I have worked with PHP and .NET (on Windows) and managing CentOS and Ubuntu servers. I had written some simple systemd service unit files, and python code that used python bindings for systemd APIs.

This is my first application to Google Summer of Code programme.

Commitments and engagements during GSoC

I have discussed my proposal with my mentor and have agreed upon the timeline and implementation. If selected, I’ll give my full dedication to the project. I have no prior commitments during the month of June to August and will be able to provide 30 hours a week to the project.

Periods of unavailability or other constraints: