Difference between revisions of "It IT/Releases/13/Features/UserAccountDialog"

We have lots of (somewhat dated) design and scoping work that was done in Spring 2008: http://people.redhat.com/mclasen/user-account3.pdf.bz2. Here are some more sketches from back then: http://fedoraproject.org/wiki/Features/ImprovedUserManagementUI. Glade files for some of the mockups are here: http://people.fedoraproject.org/~mccann/design/user_accounts/. Earlier discussion around this idea happened here: https://www.redhat.com/archives/fedora-desktop-list/2008-May/msg00006.html

Ubuntu seem to be plan working on something similar, see https://wiki.ubuntu.com/DesktopTeam/Specs/Lucid/UserAccountManagement

Matthias has been putting together a prototype implementation of the original design. Tarballs can be found here. Git repositories are here:

The code currently supports editing user information only, not groups. The dialog has the UI for login options, but it doesn't do anything because gdm lacks the necessary API. The dialog uses the apg utility to generate (somewhat) memorable passwords. The D-Bus service uses the useradd, userdel and usermod tools to do changes, and per-user files in /var/lib/AccountsService to store non-passwd user data, such as password hints and user photos.

The goal of this feature is create a single tool that allows to create new users and edit user-related information in single-user systems or small deployments. Big deployments and enterprise-level systems are not a target (we think those are better-served with a web interface for their directory server...).

The tool will (at least partially) replace the functionality of several existing components, such as system-config-users, gnome-about-me, the former gdmsetup, firstboot, the former polkit-gnome-authorization...

Use cases that we hope to cover are:

The dialog will rely on a system bus service to access and store user and group data. Longer-term, the hope is that SSSDs InfoPipe can serve as the backend for this. In the short term, we need a standalone implementation, which will

A very rough sketch of the required API could look like this:

Some of these will be privileged operations. Users will normally be allowed to set their own 'personal' data like real name, locale, keyboard, email, icon, password hint. Some of the attributes may be read-only, like uid and gid.

Listing cached users is named that way to indicate that this is not meant to be a sync call to get a list of all users, which could be prohibitively expensive and slow in a networked scenario with a large directory service. Instead, the intention is to return a subset of users that has some relevance to the local system, e.g. only users that have logged into the local system within some timeframe. When the service gets reimplemented on top of InfoPipe, it may be advised to add a separate function to query users async and optain the results incrementally.

A user account dialog has been missing for a long time. It will make the Fedora Desktop more complete and narrow the gap to other operating systems.

Note that this page describes the changes in the desktop spin related to this feature. Other spins, such as the KDE or Xfce spins, can of course use the DBus service in their own user management tool or just continue to use system-config-user. If people are willing to work on this for other spins, the scope of the feature can be extended.

Users will have a single place to edit their account data and similar user-related data. 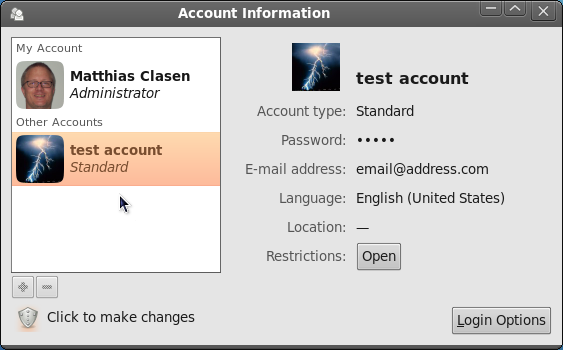 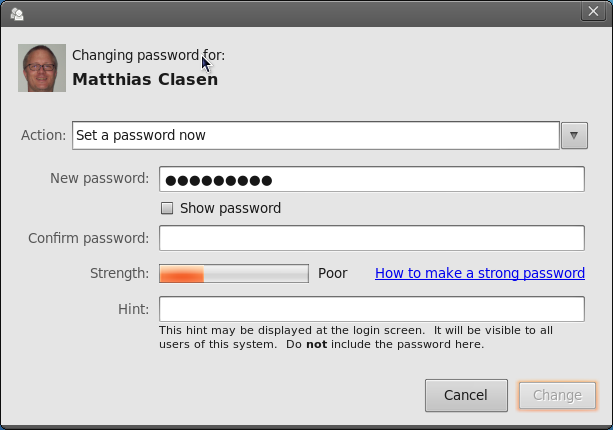 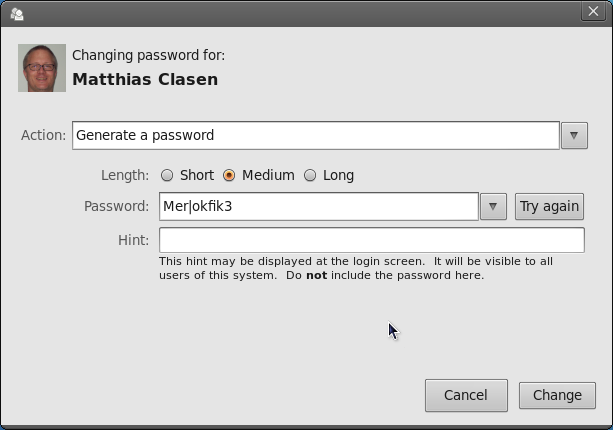 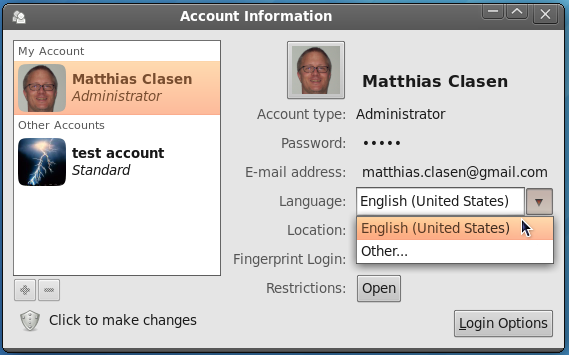 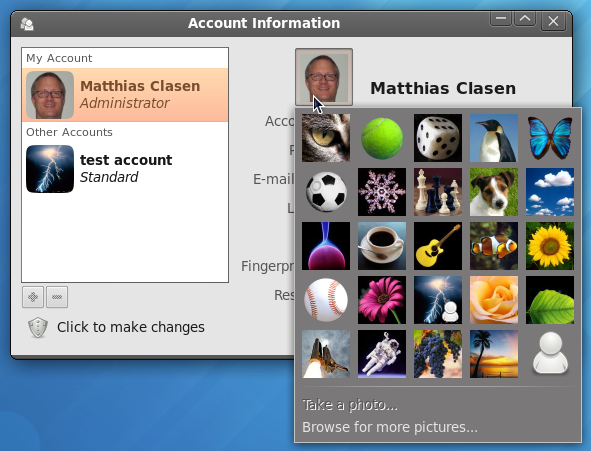 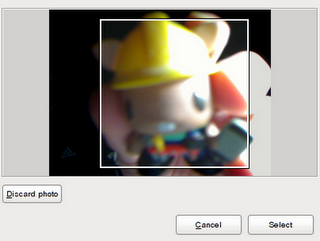 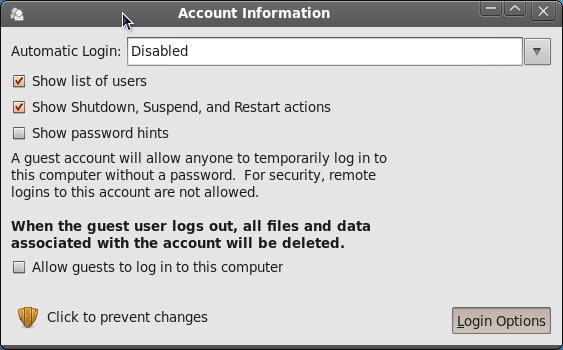 Stay with the current set of tools.

Alternatively, if the accounts-dialog lacks some important feature, we can include it but still ship the current tools.

Fedora 13 includes a new user account dialog. It lets you create and modify user accounts and setup basic user information such as privileges, email addresses, user photo, etc. The new dialog supersedes functionality that was previously available in a variety of tools, such as system-config-user, gnome-about-me, gdmsetup and polkit-gnome-authorization, and makes it available in one place.