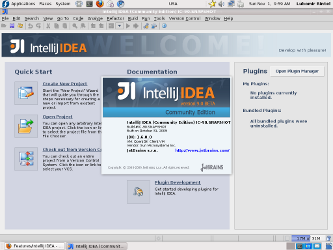 Add Community IntelliJ IDEA Community Edition packages and their dependencies into repositories. Along with Eclipse and NetBeans already provided by Fedora, IDEA is a popular Java-based development environment.

What's already done can be found at http://fedorapeople.org/~lkundrak/intellij-idea/ which should (along with the dependency matrix below) give you more specific idea about the progress.

All reviews related to this feature contain F13FeatureIDEA on Status Whiteboard.

See Summary and Scope for more details. This is mostly a packaging exercise.

Fedora users will gain comfortable access to features of Community Edition if IDEA, which include support for Java language, popular version control systems, GUI designer, etc. The overview of features is available in comparison matrix.

Apart from IDEA itself, many of its dependencies are a rather nice addition to the Fedora package collection. This includes Saxon HE, a modern implementation of popular XML-related W3C standards and recommendations, JGraph graphing library and most importantly a complete tooling for scripting in Groovy language.

Each of the dependency packages will be QA-ed passing through standard packaging review process. Fair amount of packages contains test suites run in %check phase of the package build process.

Functionality of each of the plugins needs to be verified separately and the test plan is dependent on provided functionality and would vary for each specific plugin.

Since IDEA itself is a new package, nothing depends on it. Here are idea's requirements [2]:

The dead reviews are mostly from past more-or-less unsuccessful bulk JPackage pull attempts. Once core is done, we'll start work on plugins.

This is by no means complete yet; please treat it as such. The package names may be incorrect, package s may be missing and generally all sorts of inaccuracies are likely to be present. Bulky and incomplete writeup: [8].

None necessary. If the work will not be finished early enough, the existing packaging work does not need to be reverted.

The packaging will be well described in comments, this wiki page will be regularly updated with progress and serve as overview of what is done to anyone who would like to contribute.

It may make sense to add something similar to the following to What's New paragraph. Would need adjustments in accordance with features (plugins) that could actually be packaged: