Firefox on Fedora supports hardware acceleration on Linux so let's look how to configure it and diagnose potential issues. This guide is adjusted for Fedora only and may not work for stock Mozilla binaries or other distros.

Accelerated web page rendering is supported on both X11 and Wayland backends via WebRender.

Please note that Firefox requires a GPU with support for OpenGL 3.2 or newer or GLES 3.0 or newer to enable hardware acceleration (Source and further info). You can check your hardware using glxinfo | grep "profile version" for OpenGL and eglinfo | grep version for GLES. 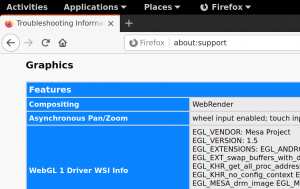 Hardware acceleration should work out-of-the-box on Wayland. If not please file a bug for it.

X11 backend can tun in two modes - EGL and XGL. You should be on EGL unless you're running NVIDIA proprietary drivers.

Hardware accelerated video decoding (for video playback or for WebRTC) is available on Intel/AMD via VA-API for both X11(EGL) and Wayland. Since firefox-101.0.1-4 package it's enabled by default for Intel/AMD users.

You can check VA-API acceleration state at about:support page, look at VAAPI row. If there's available by default, you're running on hardware.

You can disable it at about:config page setting media.hardware-video-decoding.enabled to false.

Accelerated video decoding works well on AMD as free drivers are available. Free video formats (VP8, VP9, AV1) should be accelerated out of the box. You can install H.264 VA-API support it by these steps:

Refer to this Intel chipsets video features table on Wikipedia to determine which codecs your hardware supports.

You can enable VA-API on Intel by these steps:

Firefox does not support hardware acceleration on NVIDIA, due to the NVIDIA drivers' lack of a usable VA-API interface.

Hardware accelerated video encoding (for WebRTC for instance) is not supported/implemented in Firefox, no matter which preference you set at about:config page.