How to debug Wayland problems

Wayland is intended as a simpler replacement for X11. It changes the design of a Linux desktop architecture considerably. Unlike X11, there is no dedicated standalone server in Wayland. What was previously done between the app, its toolkit, the Xserver and the window manager is now shared between the app, its toolkit and the Wayland compositor which manages the compositing, input, windows management, etc. The apps and toolkits are now in charge of their own rendering and decorations (client side decorations), so any issues usually sit between the toolkit (e.g. GTK+) and the Wayland compositor (e.g. mutter).

Are you running a Wayland session?

In GNOME, there's a gear button at the login screen which can be used to either log into a Wayland session (simply called GNOME, it's the default option), or a legacy X11 session (called GNOME on Xorg). If you have a password-less user account, you won't see the gear icon, it is displayed only when the password prompt appears. Use the gear button to determine type of session you're logging into. If you want to start your session in a different way, read the advanced techniques for trying Wayland. 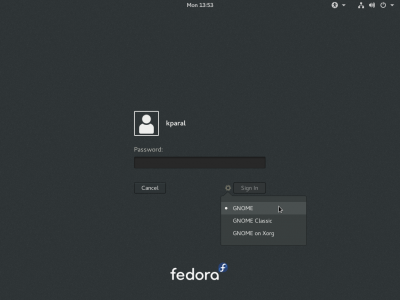 Other desktop environments are not currently capable of running a Wayland session.

Identifying the session type in runtime

If you want to figure out which type of session you're running right now, without logging out and in again, you can use several ways to figure it out:

If you're running an X11 session, not a Wayland session, your problems are not related to Wayland. It's a bug either in that particular application, or X11 itself, see How to debug Xorg problems.

Does your application run on Wayland natively, or uses XWayland (X11 compatibility layer)?

It is important to know whether the problematic application is a native Wayland application, or runs through XWayland, which allows legacy applications to still run on top of Xorg server, but display in a Wayland session.

There are several ways how to identify whether an application is using Wayland or XWayland:

If you have identified the problem to be in a XWayland application, try to reproduce the issue in a standard X11 session. If it happens as well, it is not related to Wayland, it's a bug either in that particular application, or Xorg server, see How to debug Xorg problems. If the problem happens only under XWayland but not in an X11 session, it should still be reported against Xorg server (xorg-x11-server package), because XWayland is included in it (as xorg-x11-server-Xwayland subpackage).

The most notable Wayland-ready toolkits are:

The most notable Wayland compositors are:

Please run your session with the reference Weston compositor and try to reproduce the issue. You can either run Weston as a nested window, or as a full session. First, install weston package (you can read many useful information in its man page):

Then create a config file which will specify that you want to have XWayland support enabled in your weston sessions. Create ~/.config/weston.ini with this contents:

Now you can start weston either as nested window or as a full session.

Before reporting the bug, please make sure you use the latest available software. You need to run on Fedora 23 or later, older Fedora versions are not going to get updated with latest Wayland fixes. Make sure there are no system updates waiting:

If there are (and the available updates look plausibly related to the components you're seeing issues with), please update the system and verify whether the issue is still present or has been fixed.

In order to avoid duplicate reports and also wasting your time debugging something someone has maybe already debugged, please search through the existing reports first. The most visible issues or concerns are listed in Known issues, frequent complaints, fundamental changes. If you don't see it there, you need to search deeper. You can find Wayland related issues most likely in here:

After you've identified against which component to (most probably) report the issue and found no existing report of it, there are several places where to report it:

When reporting the issue, please make your report block our tracker, so that we have a good overall picture of what is broken across many different components. In your bug report, set Blocks: WaylandRelated or Blocks: KDEWaylandRelated (you might need to toggle showing advanced fields to see the Blocks: field). That will make it block one of these trackers, depending where you reported the bug:

Information to include in your bug report

If gnome-shell gets stuck and unresponsive, it's very helpful to obtain a backtrace from its process and attach it to the report. If this happens, switch to a different VT if possible (Ctrl+Alt+F3 through F7), or log in using ssh. First install debug symbols:

Then attach gdb debugger to your gnome-shell process:

You should have the backtrace saved in gdb.txt file.

You can debug mutter (used in gnome-shell) by setting its environment variables. These need to be set prior to run gnome-shell, so if you want to log into GNOME from GDM, you need to create a wrapper script called from a desktop file in /usr/share/wayland-sessions.

FIXME: Putting the wrapper script and desktop file here would be helpful.

Here we will list high-profile issues which are known to be broken, not yet implemented, or intentionally behaving differently from regular X11 apps. Also please look at Wayland features which lists all current missing or in-progress features and their details.

To see all known issues, look at Bugzilla reports as mentioned in Looking for similar reports.

Graphical applications can't be run as root from terminal

It is not possible to start graphical apps under the root account from terminal when using su or sudo. Apps which use polkit to request administrator permissions for just certain operations and only when needed are not affected (they are not started as root right away). The discussion is ongoing about the best approach to take, see bug 1274451 and "On running gui applications as root" thread in fedora-devel mailing list.

Power users are familiar with a large range of X11-related utilities, like xkill, xrandr, xdotool, xsel. These tools won't work under Wayland session, or will only work with XWayland applications but not Wayland applications. Some tools might have a replacement which allows to perform similar tasks.

It is no longer possible for an app to change monitor resolution. Usually this was done by games to increase performance. Wayland-based games will use a different approach - scaling its output. But for X11 games (running through XWayland) this solution is not available. This results in a number of different types of behavior, based on how the game is written - the game might be fixed in the desktop resolution, or rendered as a small centered image with black bars around it, or crash on startup, or something different. See bug 1289714.

For some games, a possible workaround is to manually set custom monitor resolution before running the game, if you really need it. It will not help always, though.

Screen capture is not available with usual apps

One of the features of Wayland is its security design, which helps to guard the user against malicious apps. Apps can no longer see everything on the screen and spy on you. But that also means you cannot run a common application (like shutter or gtk-recordmydesktop) and use it to make a screenshot or a screencast of your desktop - it will see only its own window, but nothing else (or it might crash right away). System (trusted) apps need to be used to perform these actions.

In GNOME, you can use Screenshot tool (available in overview or as Printscreen hotkey or as gnome-screenshot command) to capture a screenshot of the full desktop or a particular window. You can press Ctrl+Alt+Shift+R keyboard shortcut to start video recording of the whole desktop (stop it by pressing the same shortcut again, there's an indicator in the upper right corner, or it stops automatically after 30 seconds by default) and find the screencast in ~/Videos. For screencast, you can also use EasyScreenCast gnome-shell extension.

Mouse pointer is lagging/stuttering under load

If your computer is under load, your mouse pointer movement might stop being fluent, but start lagging (get stuck in a place for a short time, then jump to a different place instantly). This is probably more noticeable on slow systems/systems with fewer CPU cores. See bug 745032.

Some applications forward all input, including system-specific keys/shortcuts like ⊞ Win or Alt+Tab ⇆, to a remote system. This is mostly remote desktop viewers like vncviewer or virtual machine managers like virt-manager or boxes. Under Wayland, some of these shortcuts can't be intercepted, and therefore are used in the host system, not the remote/guest system. See bug 1285770.