This document provides more detail to the Changes/ArbitraryBranching proposal.

PkgDB is the central repository for information on all packages in Fedora. Its primary job is to manage the ACLs of a package’s dist-git branches, but it’s also an interface to request new packages in Fedora and view metadata about packages such as a summary of its purpose and external links to a package’s builds, updates, and source. It is a central part of Fedora’s workflow today.

PkgDB in general works well for the current workflow of a package’s lifecycle. Currently, a package has several branches that are tied to Fedora releases such as “f24” or “f25”. These branches have implied service levels (SLs) and end of life (EOL) dates based on the Fedora release itself. There are also additional branches for Extra Packages For Enterprise Linux (EPEL), which implicitly share the EOL of its RHEL/CentOS counterpart. The SL on EPEL branches are strict as they cannot contain any breaking changes; therefore, a package’s EPEL branches are only updated with bug fixes, security fixes, and features which do not alter the current behavior.

Although the implied SLs and EOLs in these branches have worked well for Fedora in the past, it’s becoming increasingly difficult to juggle these different application lifecycles and their dependencies’ lifecycles under the umbrella of these limited number of SLs and EOLs, especially when trying to keep up with upstream. Please read about the Fedora Modularity project for more argument on this position.

Why Make This Change?

Factory 2.0 is an enabler for the Modularity project and that project will change how a package’s SL and EOL are defined. Since in a modular operating system (OS) a single package is no longer tied to the entire OS distribution, module packagers can now specify which specific packages should be included in the module. This allows for different branches with different SLs and EOLs. For instance, you may have a bug and security fix only branch for a specific version of a package, but you may have another branch that is the same as the upstream master branch for the package. This added flexibility can allow for a package’s SL and EOL to be defined to fulfill the needs of the module rather than just the OS release. 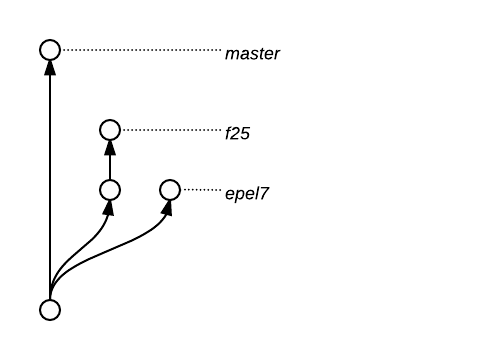 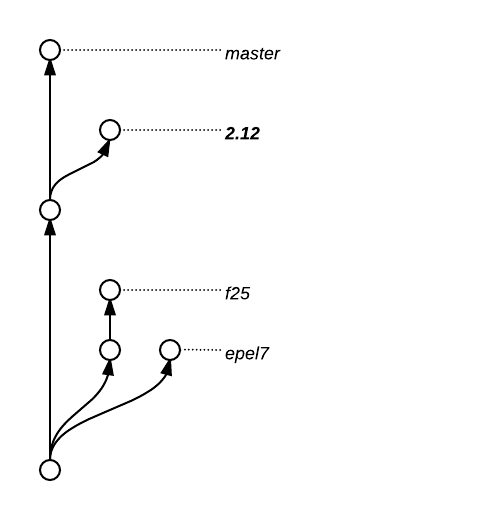 To further illustrate, below is a graphic of two versions of a django module and how it utilizes this new branching strategy.

These are all decisions that module packagers will make and they should be based on the SL and EOL they specify for their module. Now whether the module packager made the correct decisions is out of the scope of this document and best practices around this should be written by the Modularity team. One thing that is not clear in this graphic is that although these branches are named after versions and it makes logical sense, they do not have to be and could be named anything that the packager of the RPM would like; therefore, modules should choose RPMs because of their EOLs and SLs, not because of the name. 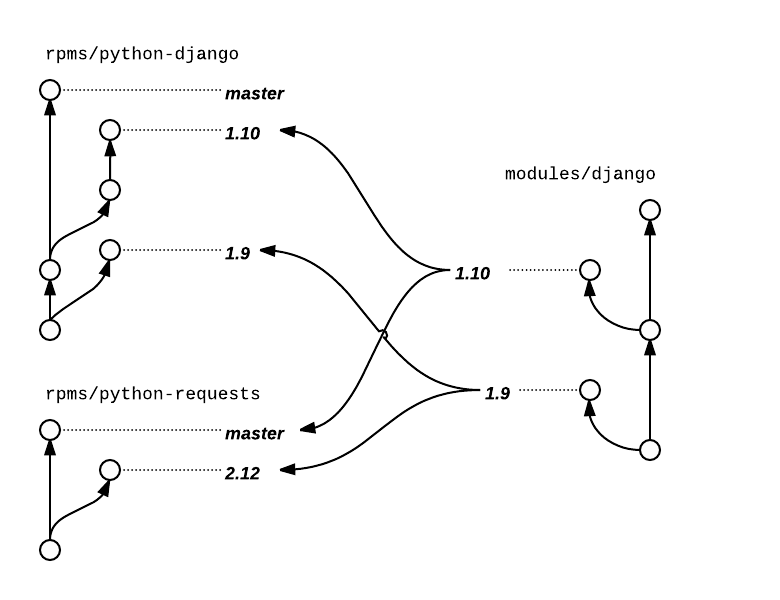 How To Make This Change

Since PkgDB is tied to the workflow of one branch per OS distribution, it needs to be heavily modified or entirely replaced to allow a packager to arbitrarily specify branch names for their package. Since these branches are no longer tied to the lifecycle of the Fedora release, they will need to have SLs and EOLs defined by the packager for the given package. The SLs should be defined through a variety machine readable parameters. The specific parameters will be decided later on and this should be decided upon by the Fedora community before the release of these changes. The Factory 2.0 team thought about modifying PkgDB but Pierre-Yves Chibon/pingou (the author of PkgDB) noted that with Pagure being deployed over dist-git in Fedora (as of this writing it is deployed in staging), it, alongside of PDC, could be a viable option to replace PkgDB.

With Pagure over dist-git and PDC (both with modifications), we could do away with PkgDB entirely for the new branching strategy and retrofit it for older branches (EPEL6/7 and F24/25/26) that we must support. This change would mean that ACLs would no longer be tied to branches but instead to the repository itself. One could either allow any packager with repository commit access to push to any branch, or not allow packagers to push to any branches and instead, only submit pull-requests which can then be merged by maintainers of the repository. To gain rights on the repository, you’d have to be given commit access the specific package repository.

There are other use cases for PkgDB other than ACL management. For instance, PkgDB is responsible for the implicit EOL and SL information tied to the Fedora release branches (e.g f25), however, this new EOL and SL information needs to be explicit and stored somewhere that is accessible programmatically. There are two approaches to solve this problem that have come up in discussions.

We decided that option one is the right approach, and here are video demos showing that functionality (the term SLA is used in the video, but this would considered an SL in Fedora):

PkgDB also has an “Admin Actions” section which is basically a ticketing system that allows new packages to be requested and approved. This could be replaced with a Release Engineering (releng) controlled Pagure repository just for tickets. CLI tools will be provided that make and process these tickets. This method also opens the door for some of these tickets to be automatically processed by a microservice that listens for new ticket messages. This microservice is beyond the scope of this project, but it is worth mentioning as a future enhancement.

PkgDB also keeps track of orphaned packages which are just packages with no owners. Ideally this functionality would be replaced with a query to Pagure or PDC. Querying Pagure would just be an API call asking for all projects that are owned by the "orphan" user. Another feature of PkgDB is that it keeps track of retired packages. Retired packages are currently distinguished by a file named “DEAD.package” in their repository. We would continue to do this, but would also mark all of the package's branches as "not active" in PDC to allow this to be queryable programatically. PkgDB is also a source for determining the default assignee and carbon copy (CC) list for new Bugzilla bugs. The default assignee of a bug would likely be the owner of the Pagure repository, but this point is up for discussion. As to the second point, a new feature is being added to Pagure to allow a user to watch only issues and PRs, only commits, or both on a project (PR #2255). The users that are at least watching the issues in the Pagure repository would then be CC'd in Bugzilla bugs. PkgDB is also a source for generating “PackageName-owners@fedoraproject.org” email aliases. The members to these aliases would be determined by the list of users that have commit access on a package repository in Pagure. PkgDB also determines who is allowed to edit Bodhi updates. This could be determined again by querying for the list of users with commit access in Pagure.

The drawback to these Pagure queries is that the queries could be relatively slow and would use up a lot of resources on the Pagure server(s). An idea to alleviate this is to programmatically query Pagure when package ownership changes or a package is retired. The results would then be stored in a JSON file that is accessible through the proxies or available in PDC instead. Further discussion on this topic is needed.

How This Affects Release Engineering (WIP)

Below is an itemized list of big tasks that roughly need to happen in order. At what point do we get to decommission pkgdb? What subprojects are blocked on what other subprojects?