Any package in Fedora can be added to Koschei entering the package name in the Koschei web interface.

When you log in, Koschei can sync package information from dist-git. Under the "My packages" tab, you can then see the state of all packages that you have any ACL on (including watch). You can also display packages of any other user by altering the URL which contains the FAS username. 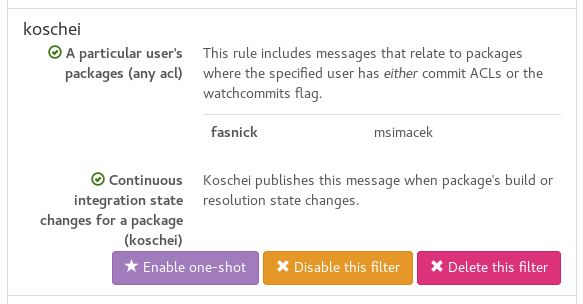 Package detail contains a link "File new FTBFS bug" that can be used to report a bug in Bugzilla. Clicking it redirects you to Red Hat's Bugzilla New bug page with prefilled component, summary and description, which you can then edit manually and submit. It doesn't submit anything by itself and it currently doesn't check for duplicates.

Arch override is a way to specify on which architecture the package should be built. This also affects noarch packages which are otherwise built on any machine that is available. Arch override can be set in the package detail view. Valid values are architectures supported by Koji ('i386', 'x86_64', 'armhfp', 'aarch64', 'ppc64', 'ppc64le'), or any space-separated list of them (for example 'x86_64 ppc64le aarch64'). You need to be logged in to alter this setting. Please don't use this feature unless it's necessary.

Dependency resolution is done via hawkey library, which is also used by DNF. That will allow us to mimic the resolution happening in Koji as closely as possible. Resolution for build scheduling is done using the latest repo and submitted builds are resolved again as they complete. The reason for that is that we have no control over exact repo used to build the package and therefore we cannot safely assume it would be the same as the one we have as the latest.

Koschei is proud to be free software and it uses only free dependencies. The code is licensed under GPL v2 or later. Source code and documentation is available on GitHub.