This page needs proofreading. Thank you.

This page describes and explains how to setup and use a python tool that aims at detecting typographic faults in translation files. It assumed that the typographic correction described here is part of a whole process of pulling, modifying and pushing translated files from/to Zanata. see L1ON/Zanata Reviewing .po Files Locally.

This page has been updated for Fedora 23.

While reviewing translation on Zanata, the reviewer may find some repetitive faults the translator has made. This kind of situation may result from various reasons such as:

In such a situation, Zanata's search and replace functionality is not of great help. To be able to search and replace repetitive faults, the reviewer has to pull the translated files from Zanata, use some OS tools to do so and, eventually, push back the modified files to Zanata.

The present page describes a tool to check typographic righteousness of .po files.

This page assumes the reviewer is using Fedora as OS – see the "Updated for" section above.

Description of the tool

This tool is a python script that can be found at https://github.com/jaaf/po_purifier. It scans a directory searching for .po files. For each file, it checks translated messages against typographic rules that reside in a configuration file named typorules.py. Each time a typographic rule is not satisfied, the program stops and asks the user what to do. The figure 1 below shows how it looks like : 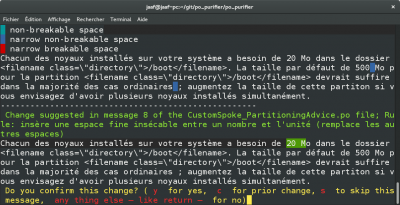 The figure 2 below shows what happens after the user has accepted the change. 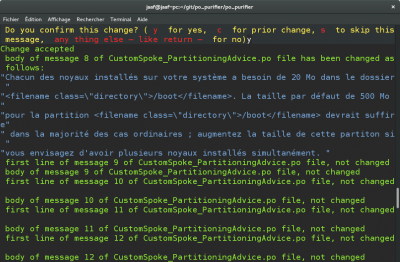 The figure 3 below shows a case where the user could use the c (for prior change) option. Indeed, we can see that an hyphen has been used in place of a semi-em dash. In French the spacing rules for hyphen and semi-em dash are different. An hyphen requires no space between the previous and the following word, while a semi-em dash requires a spaces for both. It appears that changing the hyphen with a semi-em dash is the best solution here. 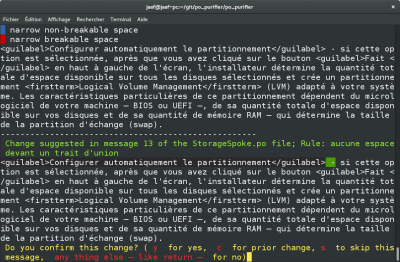 Figure 3: The user should replace the hyphen with a semi-em dash

The following figures show how the process occurs.

Frequently, it happens that a message is not really a text in the target language but a very long output of a command or the description of the command itself with a lot of options. In this case, the typo rules are very often infringed and the program stops many times. To avoid this the user can chose 's' to skip the message and prevent repetition of false detection. See fig 8 below. 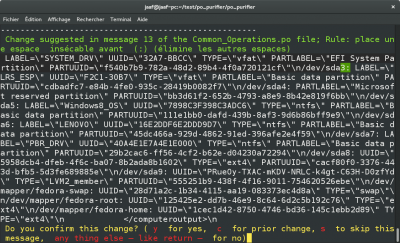 Figure 8 - An example of message that should be skipped

Aside this po_purifier folder is a fr folder. This folder contains a list of .po file that are here for testing purposes. The best is to take the po_purifier folder and to place it aside the folder that contains the translated files (.po) you have already pulled from Zanata (see L1ON/Zanata Reviewing .po Files Locally).

Generally the folder that contains the .po file is named after your locale e.g. 'fr'. You should set the locale variable at the beginning of your typorules.py file with this value to allow the program to find the translated files.

If you chose to name the folder that contains the .po files otherwise, or to place it elsewhere, you have to use the -t (--trans-dir) option when calling the program to indicate the path of the .po files relative to the location of the program's parent e.g.
python3 po_typo_purifier.py -t de/pot

The configuration of the tool for your language is done in the typorule.py file. You should set:

If the translation folder is aside the program's parent folder po_purifier and contains the .po file at its first level, just use:

where<path_to_po_file> is the path to the .po file starting from the program's parent folder po_purifier e.g.

Normally the original files remain unchanged and the corrected files (or not corrected for some of them) are placed in a folder named purified aside the program's parent folder po_purifier.

Don't forget to delete this folder if you run the program anew.

Of course, if you agree with the changes, you should replace the original files in your pull, modify, push from/to zanata process with these modified files and pursue your modifications manually or with others tools.