After a guide has been translated on Zanata, the language team has to make a thorough review of all the messages in order to correct and finally approve them. Zanata is a tremendous tool both for translating and reviewing, nevertheless, it is sometime difficult to deal with some aspects such as punctuation, verb tenses, and so on, without viewing both the original and the translated messages in context. Depending on whether the message is an image caption, or a list item, or the content of a message box,or includes a internal link (section, chapter, figure,…) as part of the sentence itself, translation may vary a bit?

Moreover, the presence of numerous tags, sometimes nested, make the visual aspect a bit far from the rendered text, and thus doesn't facilitate detection of erroneous punctuation or spacing.

All this is why, having the guide in the form of a translated finalized book may be a precious help for reviewers. This page explains how to build it.

The tools used to build the Fedora Guides is Publican. Install it with:

Don't spare the installation of publican-doc. It will be a very valuable asset for troubleshooting. The files are in /usr/share/doc/publican-doc.

Before using Publican, you should at least set the user's defaults which are: firstname, surname, email, formats, lang, langs. Please refer to the relevant page the Publican User's Gude in /usr/share/doc/publican-doc/en-US/index.html (Chapter 2.).

Normally using the three commands that follow should be enough for the needs of this tutorial:

Of course, replace the personal data with you own.

Getting the Original Folders and Files

Normally, you can create a book with publican using the publican create command. This command creates a directory structure which is described in the publican manual. Here is this structure:

The Chapter.xml file is a template for creating chapter files. Chapter files contain the content that make up a book.

In our situation, we do not need to create the book as it has already been created by the author. In fact, we can get the above directory structure, including the chapters that have been added by the author from the [https://pagure.io/] site.

Change to the directory where you want to download the files. Then run:

For example to get the release-notes files for F24, run:

Be aware that the branch name is case sensitive, thus it is advisable to go on the site and check the branch and the project names.

It may happen that a book, proposed for translation on Zanata is not yet available on the docs.fedoraproject.org site. As such a guide is also of great help for translators during the translation process, one may want to build it. To do so, use the following command :

At this stage, you could receive errors such as "Failed to load brand : /usr/share/publican/Common_Content/fedora/publican.cfg at /usr/bin/publican line 1004.". You may install if from publican-* with dnf or change "brand: common" in publican.cfg

With this command, Publican creates a new subdirectory, named trans_drop/. The trans_drop/ subdirectory contains a snapshot of the source files of the document. When the trans_drop/ directory is present in a documentation project, Publican uses its content as the basis for the commands documented later in this procedure.

If this is the first time that PO files have been created for a particular language, Publican creates a new subdirectory, named with the language code that you specified with the --langs= option. This subdirectory holds a PO file for each POT file in pot subdirectory, plus a Revision_History.xml file that tracks the history of this particular translation.

Replace the .po files in the <language-code> directory with the translated ones 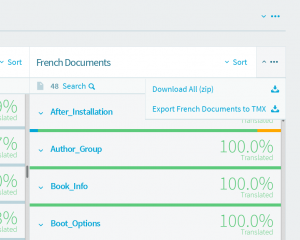 Your are now ready to build your translated book.

To build the book use the following command:

Of course, replace the language code (here fr) with your one and add – or remove – formats you want.

Normally if everything goes well – but real life is not that easy —, the resulting books should be placed in a tmp subdirectory.

If you plan to have a book to see the messages in context in order to approve them, you may still have some fuzzy messages let in the po files. Unfortunately, this makes the build process crash. Fortunately, Publican gives information about where the trouble occurred, e.g.:

Here the message is in French and it means: WARNING: Fuzzy message in the po file.

In such case, edit the po file and remove all the #fuzzy lines you find in After_Installation.po. Save your file and use the building command again.

If you don't plan to publish content online, another solution is to add --showfuzzy in you build command.

In some cases, you may get this kind of message:

Normally it should not happen but life is different. In this case, correct the fault as you can. For example, just remove the troublesome <keycombo> tag.

After that, if you had to change the xml files, you should rerun the update_pot and update_po commands above. Then rerun the build command.

In some cases, you may get this kind of message:

In this case, one < is missing from string, correct the fault.

Some characters are rendered by a # in the pdf file

Some times, it appears that some characters are not correctly rendered in the pdf but are replaced with a #. It is probably due to the fact that the builder cannot find a fallback font that provides the wrongly rendered character. For example, with the French language, the narrow-no-break space normally necessary before a high punctuation (; ! ? ) was rendered by a #. Just adding the following lines at the end of /usr/share/publican/xsl/pdf.xsl solved the trouble:

No images in the pdf file

After having built you pdf with publican, from the root directory of the document, please run the following commands: