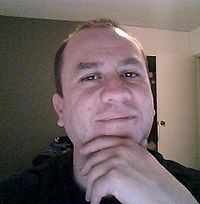 I started as technician for a couple of little companies, repairing and maintaining equipement and applications. After that, I was working for a local newspaper in Saltillo, Coahuila, Mexico, as System and Network Administrator, that's where I started to use Linux, RedHad 6.2, the company did not want to buy licenses for Windows NT, so I started to install linux servers. (1999)

First with file-servers, using Samba and Netatalk... then web (PHP+MySQL) servers... mail, firewall and DNS servers... I left the newspaper, at same time when RedHat starts with Fedora and by 2 years I left Linux aside.

We create a LUG called SLW (Saltillo Linux Workgroup), spreading the Linux use with conferences, workshops, public installations, etc. but due to a jobs compromises we start lo leave aside the LUG, some friends wants to keep the spirit of the group, but was not easy for all.

Two years ago, and now in Monterrey, Nuevo Leon, Mexico... I tried to install Fedora 9 on my old laptop, for my surprise I have a lot of headaches because drivers installations, I look into web, video, network, usb and nothing... I tried with OpenSUSE and NLD, but those dislike me... so I tried Ubuntu... Albeit reluctantly, I realized that everything works with less effort than the rest of the distributions... The truth is that in spite of it, stills dislike me...

I like Linux for fun and now for economic reasons, I would like to work with it more seriously. I feel more confident using Fedora (RedHat) at all but I have a special feeling for the terminal mode, instead of Ubuntu (Debian) distro.

After using Ubuntu for two years for fun, I decided to use Fedora for a seriously purpose and for sure fun a little bit. As I said before, I feel more confortable using Fedora at all, but specially with terminal mode... instead of Debian one (Ubuntu)...

At the end I see me helping to make a more easy-to-use distro, a lot of help is over there... docs, drivers, traslations...

So I want to participate in Fedora project, first, spreading the word to general public about Linux benefits and after that, to Linux comunitites to let them know about the Fedora goodies...