This is a proposal to create the minimum viable product for a system to allow for installation testing on remote machines without downloading installation images, creating virtual machines or having spare hardware.

With the coming UI rewrite for anaconda in Fedora 17, we need all the user testing we can get to help shake out bugs before release.

One of the barriers for users to test the UI is that they need to download a test .iso and either create a virtual machine locally or have hardware available for testing. While this is not a significant barrier to many testers, we would like to make the process easier for existing testers and possibly attract new testers who might not have otherwise participated in installation testing.

The initial function of this proposal is for graphical installation testing in Fedora 17. If we go forward with it, the system would need to be functional before Fedora 17 alpha testing is in full swing and hopefully around the time that the first testable builds of anaconda are available.

The initial working date would be to have an initial deployment before mid December, 2011.

Initial code has been written for a demo setup, but hardware remains an issue. Documentation on setup and usage also remains sparse.

The code is available on github:

The project page is lacking some detail right now but is viewable at:

This proposal is for a minimum viable product - just enough to work and to see if it would actually be used. Assuming that there is enough usage to justify continuing the project, features will be added at that time.

The basic idea is to spin up virtual machines with a Fedora installation iso and allow for installer testing through VNC that is routed through a web gateway. This VNC to HTML/js translation would be handled by guacamole.

The minimum viable product would consist of: 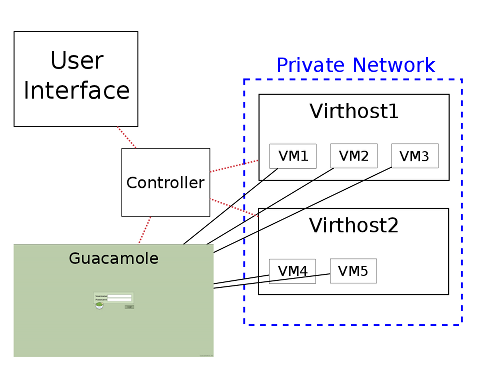 The initial system would consist of 4 parts: web interface, controller, guacamole server and virt-capable hardware for creating the VMs.

Although this proposal is only for the Minimum Viable Product, the project could eventually be expanded beyond the simplistic interface and basic support for installer testing.

While some of these potential features might be customization related, others would result in modified code and would involve working with upstream.