This change moves Atomic away from the main Fedora 6-month distribution release, and instead to separate releases every two weeks.

1. Move Atomic away from the main Fedora 6-month distribution release, including: 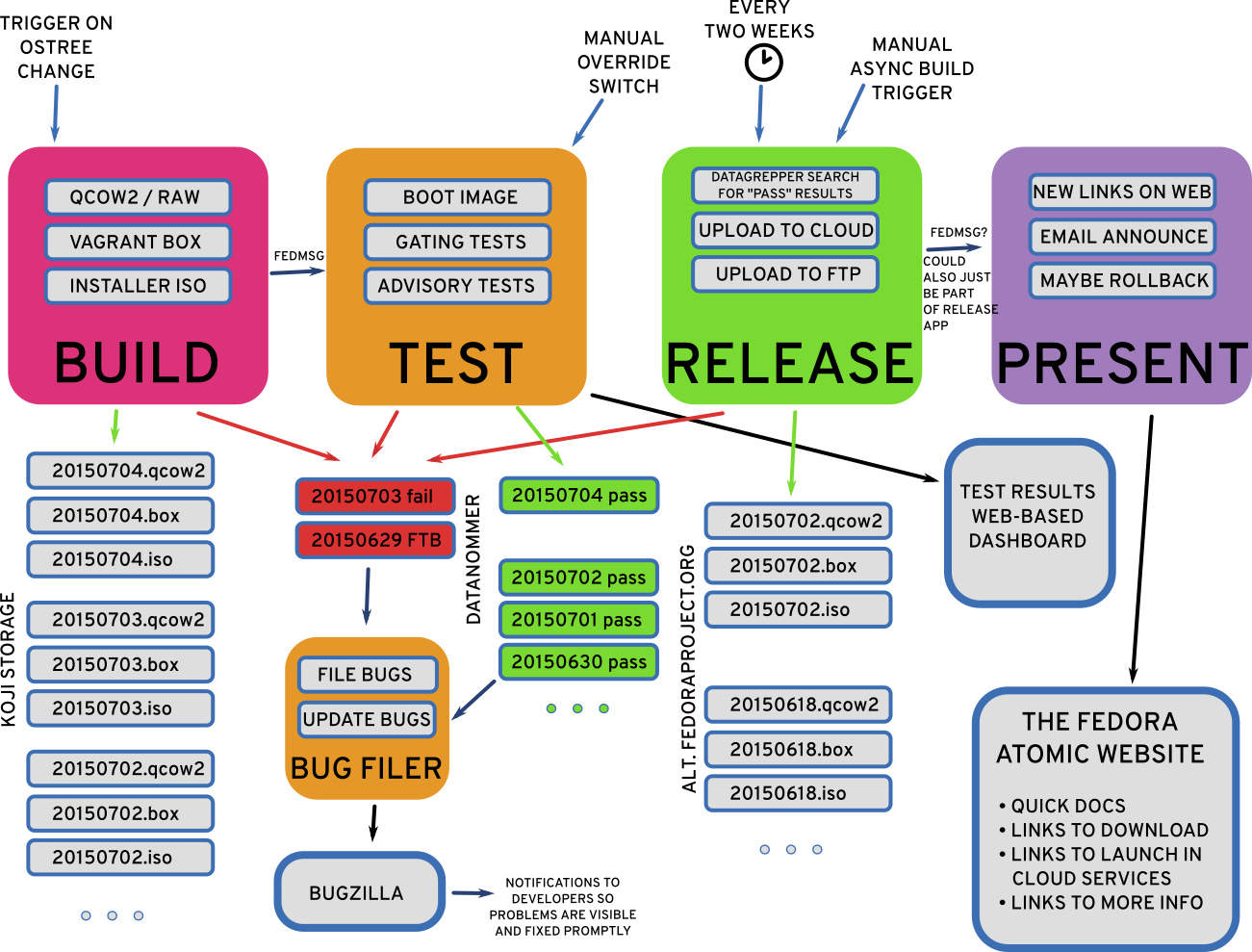 2. These images will be built using Anaconda's ostree-target mode from a nightly tree built from the current Fedora release (i.e., currently Fedora 22) plus updates — this may include updates-testing.

3. When the next Fedora release (e.g., F23) branches, those images will also start production (but may not be the target for release; see the Release section below).

Note that Fedora Atomic Host is currently x86_64 only. Other architectures may be added in the future.

As with testing, the goal is for this process to be entirely automatic (after initial development, of course).

1. Every two weeks, a process will scan the fedmsg history for image builds which have passed the tests, and

2. If no image passed the tests since the previous image was posted:

The releases will be based on a current, non-EOL Fedora release, but the decision to switch to a newer base will be decoupled from release dates for the main distribution. For example, Fedora Atomic Host may be initially built on Fedora 22, and when Fedora 23 is released, the image featured on the website may remain based on F22 for another month. Or, if newer features are needed more quickly, we might switch to the F23 beta as base before the final release. (The website will bear an appropriate disclaimer, similar to that for prerelease Fedora alpha/beta downloads.)

The new https://getfedora.org/en/cloud/download/ website will need design work and coding, of course, but after that it is intended to be automated; no one should have to update links automatically. It can follow the current design, with the addition of automated links and EC2 ids

It should also have pointers to Fedora docs and to http://projectatomic.io/.

In addition to basic "What is this all about?" information, the website will need text properly setting expectations for development status, lack of non-automated testing, support level ("you can help us fix it!"), and so on.

More detail on changes at Changes/Two_Week_Atomic/Website.

We will to use the name "Fedora Atomic Host", and phrasing like "Fedora Atomic Host, based on Fedora 22". This highlights the fact that while this project is under the Fedora umbrella, it isn't part of the traditional distribution release cycle. (The various images will be distinguished by date rather than by number.)

This has been granted trademark approval by the Fedora Council, under the Trademark Guidelines for new combinations of unmodified Fedora software.

The Cloud WG had previously considered making Fedora Atomic Host its main offering, however at present Atomic is not ready to fill that role, as it is changing too fast and not flexible enough for all use cases the Cloud WG targets. The Cloud WG / Cloud SIG will need to find other selling points. It may be that after several cycles, Atomic will mature enough to be the primary Fedora Cloud offering. See this related Cloud WG proposal for more background.

Update! Cloud WG has made Atomic the primary offering. Need marketing material updates around that.

The two-week cycle means no big semi-annual PR blitz, but interesting new features and functionality should come rather frequently. This may provide an opportunity for showcasing Fedora in the middle of our development cycle, when Fedora usually doesn't get much press.

See Two Week Atomic RACI Matrix for an individual breakdown of tasks and responsibilities. This also includes a basic, task-level accounting of status, which we will keep updated.

The primary release engineering effort is the nightly production of images. The current release engineering tools have all the parts needed to do this, but have never been used in that way before, so some development effort is required to enable the production of current + updates nightlies. (This work, however, many also benefit other areas of the project, like updated Cloud Base images or even Workstation live CDs.)

Additionally, as described above, the tool to automatically ship auto-accepted images every two weeks logically falls under the rel-eng banner.

Adam Miller, on the release engineering team, is specifically prioritizing this work.

It will be possible to do an Atomic upgrade of a system installed with the F22 Atomic to the tree matching the images produced in the new model. Users are recommended to use the latest image for new systems.

This comes down to:

A. Is there a web page at https://getfedora.org/en/cloud/download/?

B. Can I download or launch images from it?

C. Is the web page updated with fresh images every other week?

From the perspective of this change itself, testing the actual functionality of the images is a separate problem. (That is, this change involves the image production and running those images through a test framework. The actual contents of the image and the nature of the tests are out of scope.)

In addition to the development listed above, this change relies on current-release Anaconda continuing to be able to install the current release + updates. If some change in the updates prevents this, a patch to anaconda may need to be included in the build system via updates.img.

This also assumes that tunir or another test framework is in a complete enough state to execute the required tests.

The https://getfedora.org/en/cloud/ "brochure" page will contain brief introductory documentation, and link to http://www.projectatomic.io/ and whatever Fedora docs are relevant. It would be nice to start building up short howto and recipe-style documents on Fedora Atomic Host within Fedora Docs.

After Fedora 23, we have moved Atomic away from the main Fedora 6-month distribution release, and instead to separate releases every two weeks.