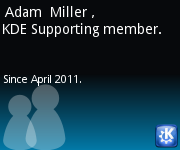 I'm an Ansible upstream contributing developer and a member of the Ansible Engineering Team at Red Hat.

I've been a GNU/Linux user since Red Hat Linux 7.

I have an Undergraduate Degree in Computer Science and a Masters of Science in Information Assurance and Security. My main goal within the Open Source community is to contribute in any way that I am able in order to enhance FOSS.

You can find me on Twitter yelling into the void on occasion as @TheMaxamillion.

I am comfortable coding in Python, Go, bash shell (3.0+), POSIX sh and I know my way around [http://www.ruby-lang.org Ruby and Node.js but not nearly well enough to claim I'm "fluent" in either. I have some experience with Ada83, Java, C, C++ but am horridly out of practice. I know some Intel-x86 and MIPS assembly but prefer to not ever code in either. I'm always dabbling in different programming languages because I find them fascinating but haven't found another language in my dabbling that I feel comfortable enough with to claim as a "skill".

I am well versed in Ansible, using it for automating but also developing against it's code base and developing plugins/modules.

I have professional experience with debian and Fedora/RHEL/CentOS server administration (in an array of implementations) and general (desktop/laptop) use but tend to focus on the Red Hat family of distributions.

I am currently a Red Hat Certified Professional, Certificate Number: 110-008-810

I can be found here on github.com

I can be found here on pagure.io

Starting December 2017, I was a member of the Ansible Core Engineering Team focusing on upstream development of various Ansible related code and content. In Early 2019 I shifted focus and became the Engineering Architect and Lead Developer for Ansible Security Automation.

Starting in April 2015, I was a member of the Fedora Engineering team mostly focusing on Fedora Release Engineering tooling but helping anywhere I am able as I am able.

From April 2012 to April 2015 I was the Release Engineer for OpenShift Online at Red Hat. As a fan of Open Source and of OpenShift, I would love to help bring OpenShift Origin (the upstream to OpenShift Online) to as many users and developers within the community in any way I can, and will continue to strive towards that goal.

I am currently a Fedora packager and plan to continue this for the foreseeable future. I still enjoy playing around with other distros but prefer to develop/package for Fedora as this project is the one that puts forth my own personal beliefs in software freedom as well as keeping up with wonderful quality assurance, a helpful community, inspiring innovation, and an over all solid distribution.

I am currently a Friend of Gnome and I encourage others to join in as well. http://www.gnome.org/friends/

I am currently a supporter of KDE e.V.'s Join the Game program and I encourage others to join in as well. http://jointhegame.kde.org/

I hope to continue to contribute to open source as a whole by developing custom applications, patching and packaging, giving support on irc support channels, writing wiki pages and documentation, and so much more.