Matthias, please introduce yourself! Who are you, and what do you primarily work on?

I am 39, married and have 2 lovely kids. We live in Massachusetts, close to the Red Hat 'Boston' offices.

I lead the 'core desktop' team at Red Hat. When I am not cheering on my team, I'm touching code all over the GNOME stack, and doing a lot of the mass updates when a new GNOME release comes out.

On a more personal level, I am one of the upstream maintainers of Glib and GTK+, which sit at the very bottom of the GNOME stack. I am also a member of the GNOME release team.

I wanted to talk to you about some of the improvements to Fedora 12 for an everyday desktop user. What is the newest feature or improvement that you are most proud of?

As always, we have done some exciting feature work, that we will talk about later. But what I am most proud of is not so much the individual features, but the effort that we have put into 'polish'. There have been many small improvements that, in whole, should really make the Fedora desktop experience more enjoyable.

To name just a few things that we have done recently:

* We have reduced the visual noise by not having icons in menus and buttons everywhere.

* We've given tooltips (those small popups that appear when your pointer rests on a control) a fresh look and improved their positioning.

* Controls on the panels have been given a bit more breathing room.

* Status icons have a more consistent and stable ordering.

* Notification bubbles got a new look, and we reduced their frequency.

* Personalization of backgrounds has been improved by adding an easy way to get more backgrounds online.

* Font rendering and hinting has been improved.

I have written about some of these earlier here (including screenshots): [1]

NetworkManager is the network configuration solution that has been in Fedora since F7. What are some of the improvements we will see in Fedora 12?

Networking is a very complex area. NetworkManager has had a long hill to climb, but in the last year or so, it has really become good enough for most use cases.

One thing that people might look forward to in NetworkManager in F12 is comprehensive support for Mobile Broadband, ie use your cell phone to connect to the internet. The inimitable Dan Williams has written about this here: [2]

Another new feature that moves NetworkManager closer to being 'the networking solution' is the ability to manager system-wide network connections. In the user interface, this show up as a simple check-box to make the connection 'available to others'. Behind the scenes, NetworkManager checks that you are allowed to manipulate system-wide connections, and stores the information in the same place and format it has always been, for seamless interoperability with traditional network scripts.

From a more corporate perspective, it is a big step forward that NetworkManager handles IPv6 as well as IPv4 now. It will also work along with more complicated network setups, such as bridging, so servers can also take advantage of its features. We even added s390 support! 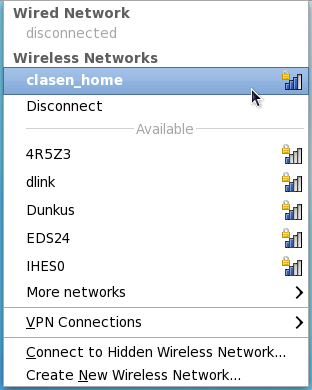 I almost forgot to mention that the NetworkManager applet has received a nice face-lift as well - I really don't know how Dan found time to get that done between all the other features...

Let's discuss some of the features that users access for what we'll call social purposes. I understand that webcam support has been extended?

I am not a regular webcam user myself, so I don't have much first-hand experience in this area, but we are very lucky to have Hans de Goede who has made a real difference for webcam support. He is the creator and maintainer of the libv4l library that plays an important role here.

In summary, if you plug your webcam into a Fedora 12 system, it is likely that it will just work.

Empathy is another application for connecting with others. What are its advantages?

Empathy is an instant messaging application that is part of the GNOME desktop. Just like Pidgin, it supports a bazillion different IM protocols, as well as IRC and video chat.

So why switch? Empathy is built on top of a flexible communication framework called Telepathy, which makes it easy to integrate collaboration and communication features with the rest of the desktop. One small glimpse of this is already visible with the ability to share your desktop with your chat contacts. We also hope to see rich integration with GNOME shell in the future.

If you are a happy Pidgin user, there is no reason to despair; pidgin is just one 'yum install pidgin' away.

From reading the Fedora 12 feature list, I see that enhanced support for DisplayPort has been added. Can you explain what DisplayPort is, and how this can help out desktop users?

DisplayPort is a digital display connector and protocol, similar to DVI. It allows monitors to provide higher resolutions, higher color depths, and higher refresh rates. Laptops will probably use DisplayPort to connect the internal panel in the future, therefore it is important that we get the driver support for this technology in place.

On a more practical level, DisplayPort plugs are smaller than DVI or VGA plugs, and much nicer to work with. :-)

Speaking of monitors, I understand that Fedora 12 now supports desktop spanning. How does this work?

Spanning multiple monitors is not a new feature per se. This has been possible for a long time. But so far, if you booted your system with multiple monitors, the X server defaulted to clone your desktop on all connected monitors. In Fedora 12, we have changed the default to arrange the monitors next to each other. Another nice touch is that the X server now notices when you connect a monitor and turns it on automatically.

Some other improvements in the support for multi-monitor configurations are that plymouth (our graphical boot splash) and our screen saver handle multiple monitors nicely.

Personally, I'm a big fan of watching videos and listening to music online. Can you tell me about some of the video and audio improvements in Fedora 12?

As you may know, Fedora has been one of the first distributions to integrate PulseAudio, and we have not stopped there. We introduced a new sound and volume control dialog in Fedora 11, that replaced the 'a-thousand-obscure-sliders' model of the ALSA sound API with PulseAudio's nice stream and device volume concepts. We got some criticism (in fact, a huge flamewar), because some corner cases were not covered. In Fedora 12, this should not be a problem anymore. The sound dialog now lets you select sound cards, input and output devices and provides easy support for setting up multi-speaker setups.

On the video side of things, I should mention that Totem (our default movie player) has much improved YouTube and DVD support. Of course, in many cases, video requires codecs that we cannot ship in the Fedora repositories. But the PackageKit integration makes codec installation very easy and painless.

One codec that we can include is Theora, and we are very proud that Red Hat's Christopher Montgomery and the xiph.org team have produced a very impressive update to the Theora encoder, codenamed Thusnelda, which is included in Fedora 12. Monty has written detailed reports about the numerous improvements in Thusnelda, which are linked from the Fedora feature page ([3]).

Before leaving the topic of audio and video, I should mention that iPod touch and iPhone users will be able to access files on their devices very easily with Fedora 12. Unfortunately, we don't have Music syncing just yet, but we hope to enable that in an update.

Boot times are one of those things that can drive any user nuts, whether they are a desktop user or a sysadmin with a bunch of machines. How has Fedora 12 improved boot time?

Since an effort was made to improve boot time for the last Fedora release it wasn't a specific goal for Fedora 12. However, as we continued to streamline our login experience we have noticed additional improvements in boot time.

Other than that, the big story about Fedora 12 and booting is that we have modernized our infrastructure, by switching to Dracut ([4]).

I've got a handful of Bluetooth devices. What is Bluetooth support like in F12?

Bluetooth support is awesome! Or so I hear, at least :-)

In particular, the support for audio (i.e. Bluetooth headsets) works really well, and we also have initial Bluetooth networking support. This is limited to the PAN profile for now, which is used on a number of mobile devices. Support for dialup networking (DUN) will come in Fedora 13.

Last, but certainly not least... I've been a Fedora user since F8. How easy will my upgrade be? And if I wasn't a user; do I need to be an expert to install F12? Is there a way for me to try it out without committing?

Your upgrade should be fairly easy, using either the preupgrade utility from your existing Fedora system, or the upgrade option when booting the install CD.

If you want to try Fedora 12 first without installing it, getting the live CD or USB media is the perfect way to do so. If you like what you see, you can just install from the running live CD for a fresh installation.

Matthias, all of these new and improved features sound awesome. Thanks for taking the time to talk with me, and on behalf of the Fedora community, thank you for all your hard work in helping to make Fedora the best distro around!