After releasing tickless kernel v2.6.21 had started search for application which do unnecessary wakeups. All these fixes should save power and money - comparison.

It was created a review of all initscripts because if user's would switch off unused services, they can reduce power consumption and make their boot faster. During the review was removed service bluetooth which is now switching on/off on demand that means every time the hardware is available. The other services couldn't be rewritten or removed. (Link to work with services in Deployment Guide)

is a dynamic adaptive system tuning daemon that tunes system settings dynamically depending on usage. It does so by monitoring the usage of several system components periodically. Based on that information components will be put into lower or higher power saving modes to adapt to the current usage. Devices could be handled by plugins which are currently providing ethernet network, ATA harddisk devices and cpu tuning.

Tuned can be executed as a service:

After installation it is added into services started after boot. Tuned can run as a daemon, which is the default setting.

Tuned has optional path to configure file. The default is /etc/tuned.conf but user can change it by:

With the default setting are switched on all plugins namely:

Tuned contains few profiles for different use-cases. They can be set or changed by tuned-adm utility.

The disk monitoring and tuning plugin in tuned take care about this problem. The idea is to monitor disk activity and activate the higher power management features if the disk isn't used for a while and even allow it to spin down. In case disk activity increases again we deactivate them again.

The netdevstat and diskdevstat are two systemtap tools that allow the user to collect detailed information about network and disk activity of all applications running on a system. These two tools were inspired by powertop, which shows number of wakeups for every application per second.

The basic idea is to collect statistic about the running applications in a form that allows a user to identify power greedy applications. That means f.e. instead of doing fewer and bigger IO operations they do more and smaller ones. Current monitoring tools show typically only the transfer speeds, which isn't very meaningful in that context.

Both utilities are part of tuned-utils package. They can be executed as

Quick explanation of each column:

Those are the 3 applications that have a WRITE_CNT > 0, meaning they performed some form of write during the measurement. Of those, plasma was the worst offender by a large amount. For one in total number of writes and of course the average time between writes was also the lowest. This would be the best candidate to investigate if you're concerned about power inefficient applications.

Missing information
There should be added definition for every profile - best use-case.

is providing various profiles. At the moment (2009 October 21) exist these:

is proper profile for a desktop.

is obviously laptop on adapter. It extended the battery live especially, when user wouldn't use laptop at battery.

is obviously a laptop on battery in power-saving mode.

is proper profile for a server without any specifically defined functionality.

are special profiles for servers aimed to specific function.

doesn't use tuned but it used various sysctl values to maximalize time when the disk is idle.

and now pick one of them

Each profile is using ktune for setting various sysctl values which assure optimal time for writing on disk etc. Tuned is setting automatically disk, net and cpu settings. Details about possible values and enhancement could be found here.

Scomes is a part of tuned-utils utilities which is based on SystemTap script for watching system resources.

SystemTap scripts need kernel-debuginfo matching to actual kernel. A current kernel version could be obtain by:

Debuginfo will be installed by:

A binary must have unique name or there are no other binaries with same name on the system. Execution of scomes:

timer - in seconds displays only final result when timer is 0. In other cases it displays actual output every N seconds.

The measurement can take a while. It is possible to use timer for actual result. SystemTap executes scripts under root or it is needed add current user into group systemtap. Since SystemTap v1.0 should be possible running scripts as a normal user.

Example output of the measurement:

Missing information
This part should include pros and cons for variety of settings.

is a linux tool which can find programmes that consume resources even if the computer is idle. The most resource consuming had been kernel but since version 2.6.21 is kernel tickless. PowerTOP is using various information provided by system. It combines all information and produce list of programmes which are more power hungry.

Basic goals of PowerTOP are:

C-states are idle states, P-states are operational. C0 means busy state of CPU, the other C-states mean CPU is idle. The higher percentage in C3 or C4 means that CPU is really saving some energy but it also means longer time when it comes back to C0 and executing instructions.

P-state shows the operational state, or the frequency the CPU is running at most of the time. Therefore if laptop is using low power profile and operating on battery, then OS will lower the C0 frequency and voltage which means CPU will be in higher P-state. Lower frequency means lower power. Reducing the voltage decreases the leakage current from the CPU's transistors, making the processor more energy efficient resulting in further gains.

should be small as much as possible. The wakeup is matching with C-state results.

display information collected from ACPI in case laptop is on battery. It can measure how much time on battery is left.

In this part could be identified most power hungry application. Many application has been fixed to be more power friendly. As can be seen on the picture there are mostly hardware interrupts but also some user-space application. Example of dealing with problems: 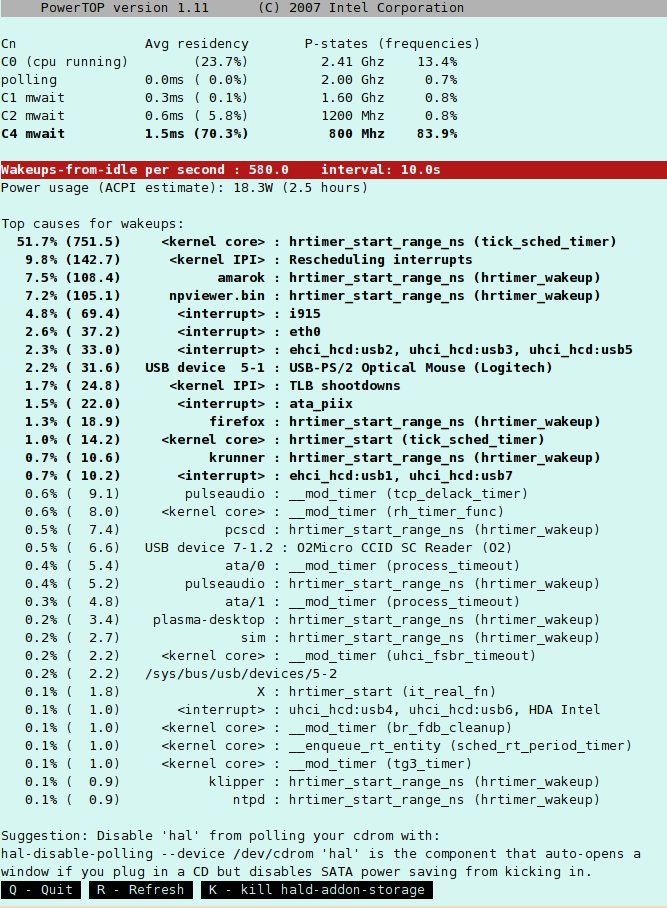 Quite often it can be seen these which are displayed with solution:

These things could help but they are often part of tuning profiles which can set a computer in lower power consumption state e.g. using tuned.

Battery Life Tool Kit provides reproducible loads which can simulate tasks and measure power performance of system running on battery. The tool can be stared on the desktop too. There is necessary to use -a option that turns off handling battery info of course unavailable on the desktop.

The results are stored in the path defined in bltk.conf. The default patch is:

or from tray (plasmoid): PowerDevil

First of all it is needed Let PowerDevil manage screen powersaving on. Then can be enabled other things. Lock screen on resume is safety feature, it will asked for a password after display goes to power saving mode. When Enable warning notifications are enabled then a user is noticed about changes related to power management. For every issue can be set in Configure Notification action e.g. play sound, when suspend will be done. Here can be also set waiting before suspend action.

There are pre-set profiles for every action in regard to usage or state of battery. Performance profile is most suitable for laptop on Adaptor or for desktop computer, but that doesn't mean they can't use power saving options. The other profiles should be specified by users for their needs.

Here can be redefined levels of battery capacity. For example if the battery is broken or old, it could be better to move low level at higher percentage.

For every profile exists set of settings. Disable desktop effects is suggested for all profiles except Performance profile. Dim display when idle for more than depends on hardware because some displays dim automatically when they are not on adaptor. Display is consuming most of the power, so it's recommended set this option for all power-saving profiles. When the system is idle option can be used for locking the session, turning off screen, suspend etc. Although here can be defined actions for laptop lid closed or pressing sleep/power button. This feature is more user-friendly than to save power.

From power management point of view is better to use automatically standby, suspend or power off than screen-saver. Especially when is screen-savers based on e.g. OpenGL, then it's power hungry application. Brightness of screen can be hardware dependent and some screens are changing brightness automatically.

This part is fully dependent on hardware possibilities of a current computer. In case there exist more than one CPU, then it is possible to switch it off. This usually doesn't apply for two core CPUs. CPU frequency scaling policy offers various modes executed by (kernel) governor. Available governors are stored for appropriate cpu here:

The default values is ondemand governor which keeps the system’s speed at maximum unless it is pretty sure that the system is idle. Therefore this will be the mode that will save power with the least performance impact. On demand governor is "predicting" future load of CPUs, so it is not recommended to change the governor mode unless special behaviour of system is needed.

When loading profile execute a script that will be executed after switching to a current profile.

On some Dell machines (known to work is Dell !PowerEdge R610) you can get power information using IPMI. Note that these are vendor extensions that are not supported by ipmitool - you need to install freeipmi. And of course IPMI must be running (service ipmi start).

It is possible to create profiles but some things can't be done by application automatically. List of tips which can help on laptop/server or both: