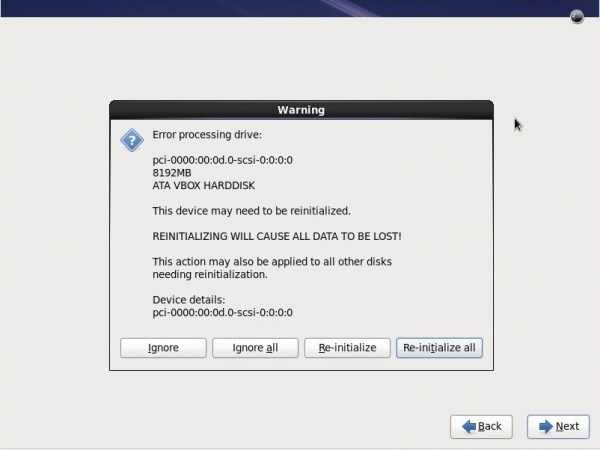 There's a few issues with this screen. There's a bug open on it requesting that the text be changed to be more accurate. There's bigger problems than that, though.

Let's go a bit into the background of this dialog. It occurs early on in the screen flow:

Here's the full order of things in the anaconda code.

The screen that asks if you have basic or specialized storage must come towards the beginning of the screen set, because it is at this point anaconda has to scan to see if any pre-existing installations are on the system in order to know if we can upgrade a pre-existing system or not. However, we don't want to scan specialized storage devices which may be mounted to the machine if we know for sure that the user isn't interested in using them as part of the install - it'll take a while, it may spins up a lot of devices that were not active using more electricity, putting wear on equipment, etc. hitting a lot of networks.

Anyhow, once we know which devices to scan (local if basic, local+network if specialized), they are scanned and if any of them appear to have missing partition tables, this dialog is popped up.

The problem is, anaconda may not know how to read the partitions on the drive, another operating system may be able to. There *could* be data on that drive, but we just don't know because we don't know how to read it. The drive may very well be blank (if it's brand-new / baremetal) or it could be a virtual drive and have no data either. So our dilemma is: 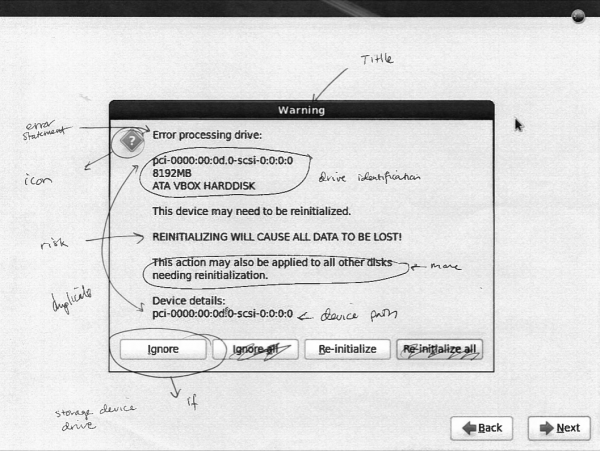 So here's some of the issues the current screen has:

In this approach, we think about the different types of users who might encounter the dialog and offer those users who have any data to lose an easy way to avoid the entire reinitialization screen and its related stresses.

Some issues with this idea is that it's not very scalable - you have 100 drives you can't read, you get this radio button dialog for 100 drives. Ouch. We could potentially provide a list view of all unreadable drives, but right now anaconda pops them up as it goes. It may be possible to poll all the drives first, cache the data, and then present a list, though. It's simply not possible in anaconda right now. But with a list of multiple drives, the multiple choice selection won't work any more - each drive might be different. Um, so maybe not the best idea - or at least, this approach needs more work.

If you remove all the drives from the install to protect them you get the last dialog - we can't install if there's nowhere to install to. :)

This is a less-weighty approach to apply in the meantime, without a lot of underlying code change. Except, oops, it does require too many underlying code changes. Right now there's no caching of drive data, so the dialog pops up as anaconda scans drives and detects missing partition tables. So anaconda doesn't know, until it knows, that a drive is unreadable. So the multiple list view won't work here. 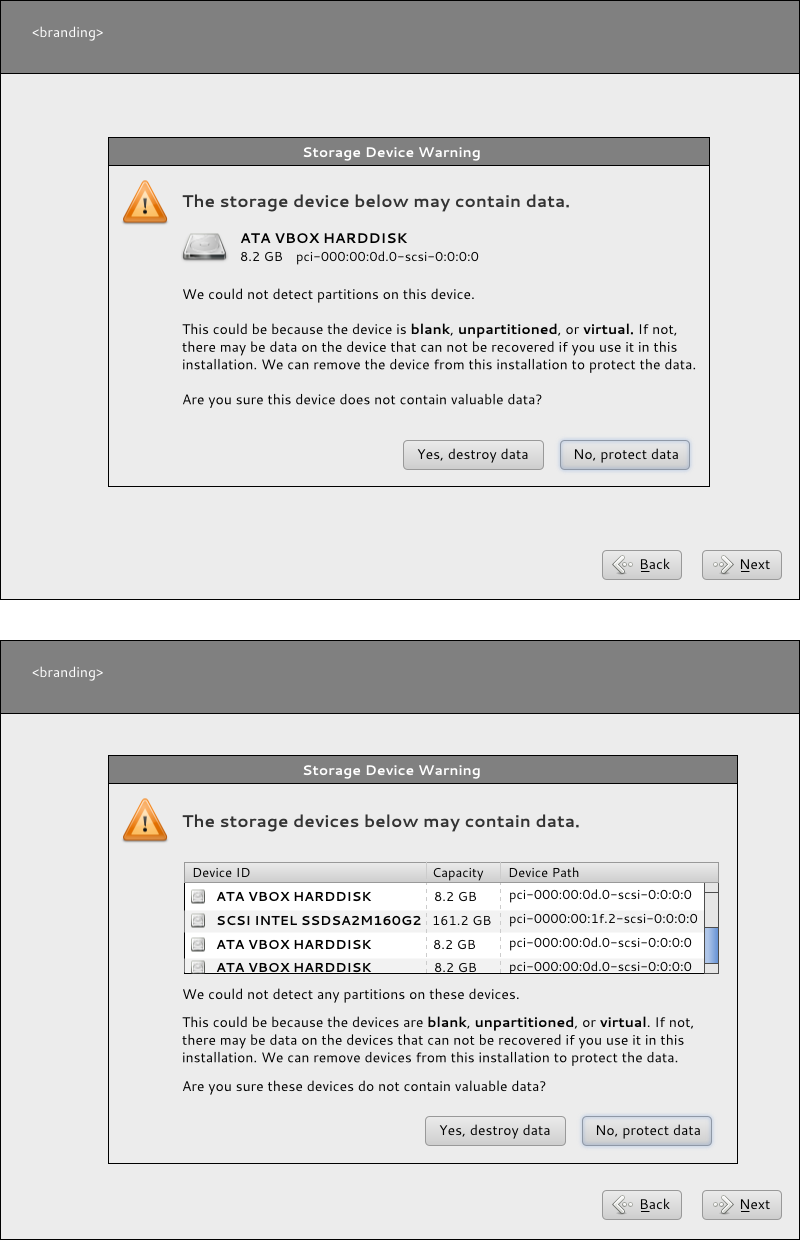 This approach caused the least code churn so it's the one we'll go with in the meantime we figure out the larger problems here.

Note the button text has been changed - it says 'Yes, discard any data' and 'No, protect any data.' We say any data because there may not be any data at all. Saying 'discard data' makes it sound like there actually is data to be discarded. We say 'discard' rather than 'destroy' because it's a little less frightening of a word I think.

Rather than having four buttons along the bottom, we have two that apply to the single device in question. For our virt-installing friends, we have a checkbox that will enable the button to apply to any such devices.

So while we have a new layout and new language, the functionality is unchanged. 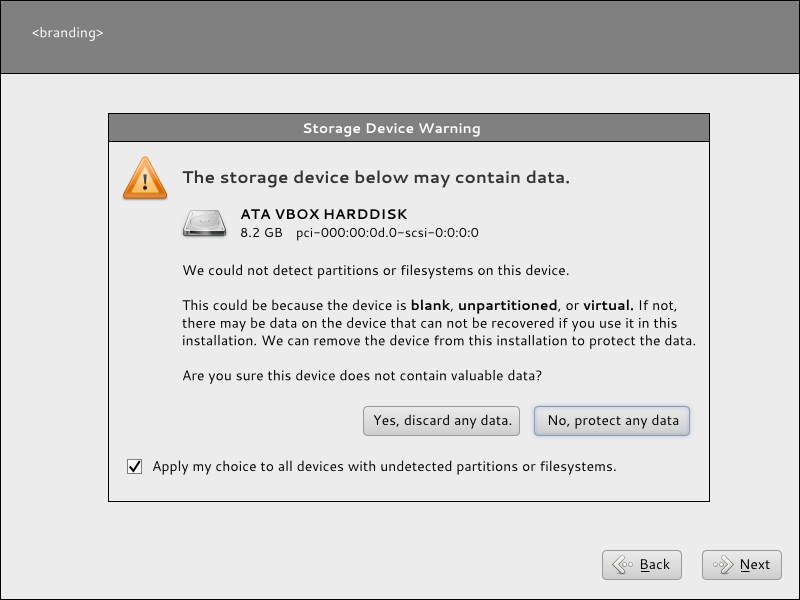 Where to go from here

My current latest idea to show the list of drives and ask the user if there is any data they care about on those drives, because we can't read them and will need to erase them to use them in install. Then give users the options to remove them from the install process / protect them one-by-one with the option to check off the drives they care about the data on. (or vice-versa, check off which drives they want to use for the install.) 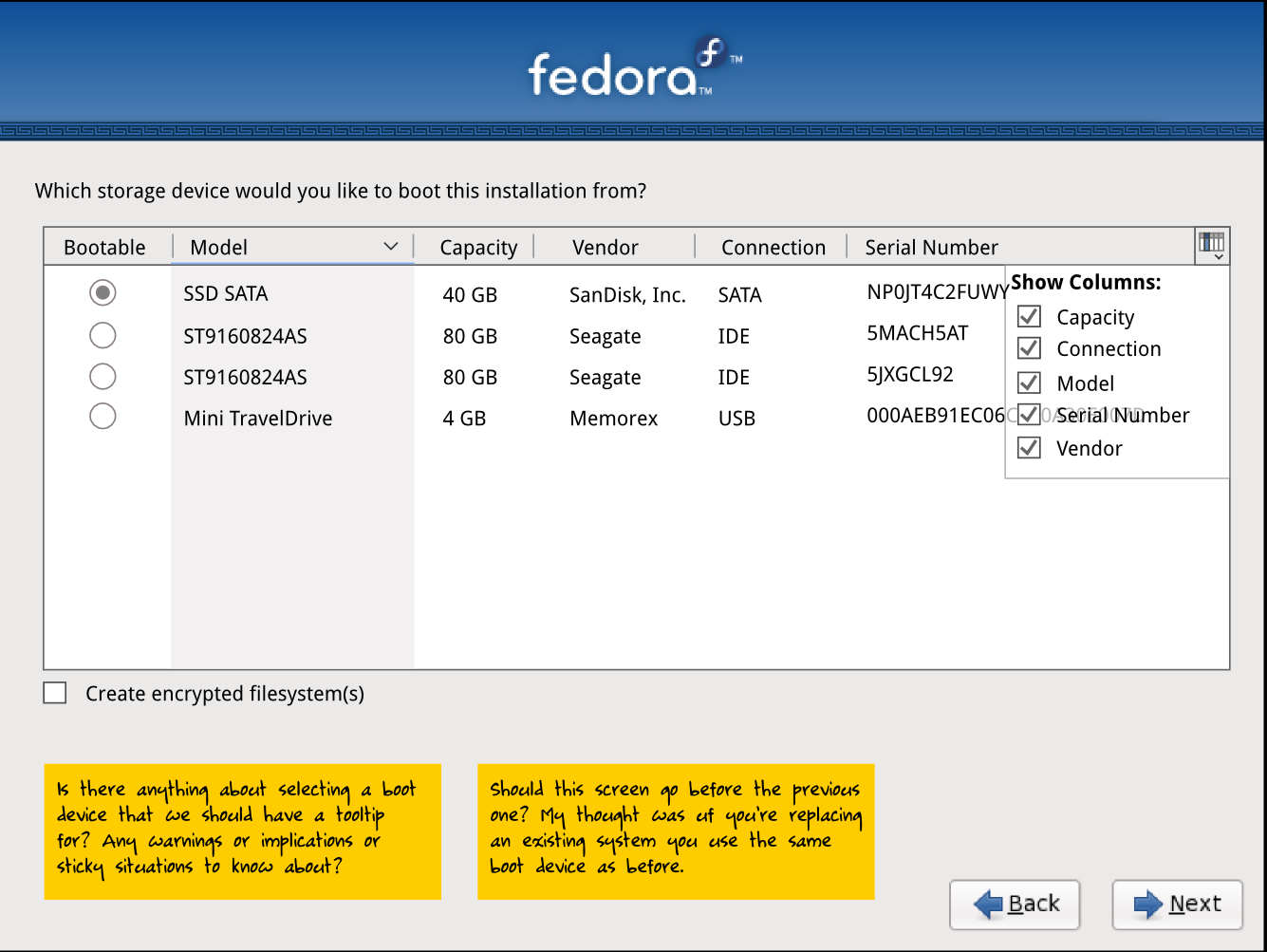 . This was removed at the last minute because of complaints that we ask for too much information about storage devices in the UI. I think part of the problem is because we only worked on the storage UI, not the entire anaconda ui, so there was some redundancy or at least the appearance of such. This time around hopefully we'll get this right since we're looking at the entire UI.

Here's some quick paper thumbnail sketches that were used to create the mockups above: 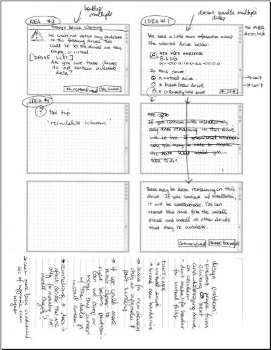