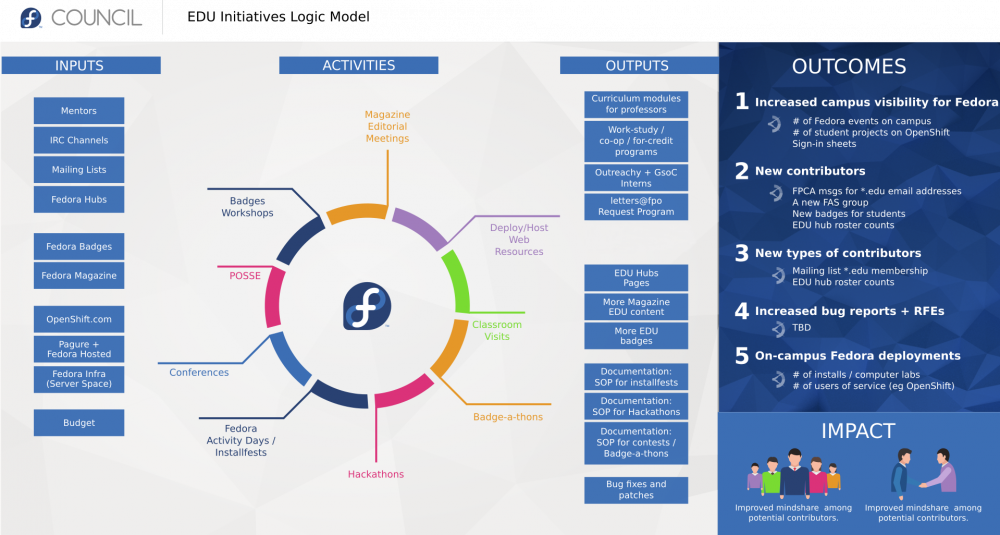 Increased user base with a specific focus on future contributors.

For maximum effect, this should kick into gear at the beginning of the (Northern Hemisphere) academic summer, with the intent of having events planned during the 2016-2017 school year.

Some prototypes of this have been performed at Brno universities over the last few years, with very positive results. We should coordinate with the contributors involved in those efforts and learn from their successes and failures.

There is also a University Outreach program run by Red Hat's "Open Source and Standards" department which was involved in the RIT partnership from which we eventually acquired Remy DeCausemaker. I assume he will have plenty to add to this discussion as well as contacts in the university world.

After having a conversation with Red Hat's University Relations Team, we have drafted a proposal for a program that looks/feels more like traditional EDU outreach. Below is a description of the particulars. A rough outline of the program would be:

Karsten Wade has described in the past the "funnel" of contributor engagement.

The program's focus will be on a minimum of three schools per region (APAC, EMEA, LATAM, North America). The schools should have:

Owing to the number of schools, one Campus Ambassador will be identified for each selected school.

The data recovered will help in determining the level of impact each event had. This will be instrumental in planning and managing future events. Data visualizations and reports will be generated based on the raw data collected.

The answers to these questions will form a formidable base for the complete program. Along with the aforementioned questions, the attendees could also be enlightened about Open Source in general and its principles. Further, this will facilitate the understanding of the answer to the question: Why Fedora? (without being disparaging to other Linux distributions).

Power users could be defined as avid learners aiming to elevate their productivity by using available tools. The workshops held in this program will focus on teaching advanced tools and how Fedora can be easily set up to use these tools.

To help identify regions and locations that Fedora may have an opportunity to influence, it is helpful to have an idea of what Ambassadors across all regions of Fedora actively have a position of influence in either a university, high school, or other education environment. This is regardless of role, whether as a student or a faculty member. Ambassadors with connections to education institutions are encouraged to fill in their information below.